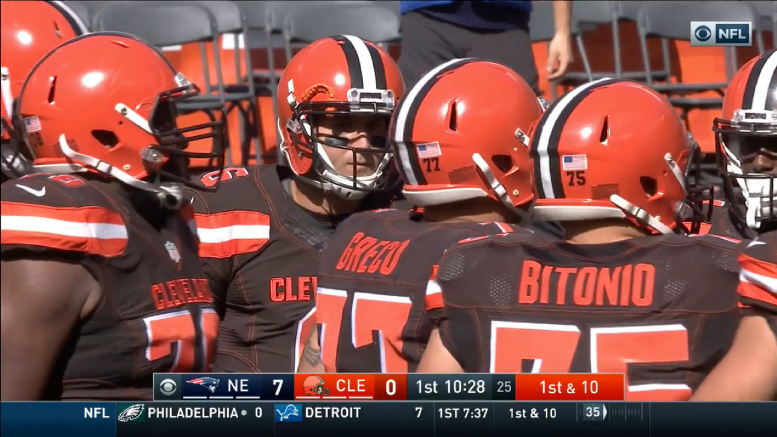 Somehow I missed this, but a little over a week ago, the Cleveland Browns placed their final stable lineman outside of Joe Thomas—nine-year veteran John Greco—on injured reserve on November 28, following a foot injury that he sustained in the team’s loss to the Giants the day before.

The injury adversity that the Browns have dealt with this season is approaching unfathomable levels, and Greco’s injury was not one that they could afford. He was one of only three linemen to have played more than 65 percent of the team’s snaps this season, though right tackle Austin Pasztor has only missed 10 snaps. The problem with him is that he is simply not very good.

Thomas and Greco were the team’s only two offensive linemen that were consistent performers, and Greco’s role has been especially important this year because the Browns have relied upon his versatility. He has started several games at center this season due to Cameron Erving missing time with an injury.

Greco makes it three linemen to go on injured reserve now for the Browns, including the very notable injury to fellow guard Joel Bitonio, who has been one of the better young guards in the league since he became a plug-and-play starter for them a couple of years back.

Now they are without both of their starting guards, who were two of their three stable linemen, and, after seeing nine different offensive linemen log at least 20 snaps’ worth of playing time this year, they are reportedly preparing to exercise a 10th, and one with some pedigree.

Who may now recall, after reminding you of what you have no doubt previously forgotten, that the Browns earlier acquired off waivers from the Patriots—who previously made a trade with the Cardinals—former first-round guard Jonathan Cooper.

Arizona drafted Cooper, out of North Carolina, with the seventh-overall selection in the 2013 NFL Draft, but he managed to dress for just 24 games in three years, due to a number of injuries, and he started only 11 of those games, never playing particularly well—certainly not to his draft stock.

The Patriots acquired Cooper, as well as a second-round draft pick, as part of a trade, but after losing out on a starting job at either guard position, New England released him in October, and the Browns claimed him off waivers officially on October 10. He has not played since then, and only dressed for two games.

But according to the Browns’ website, with Greco now on injured reserve, the team is giving him first-team reps in practice, with Head Coach Hue Jackson describing it as a chance for him to “etch a new chapter”.

“That’s what he’s here for, to get another opportunity”, Jackson said during his press conference. “We’ll see if he can go out there and do what he’s capable of doing”. If not, expect Browns quarterbacks to continue to get crushed. Cleveland is on pace to relinquish 60 sacks this year.