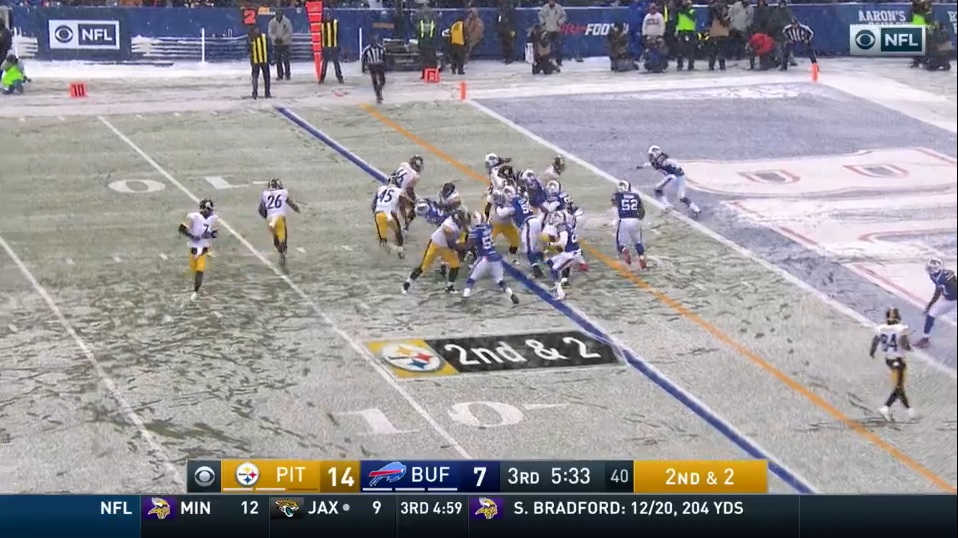 To be fair, Le’Veon Bell is built for any weather? Rain. Cold. Surface of the sun. He’ll still get you 125.

But Mike Tomlin made a special point about Bell’s degree of success in snowy, run-dominant games like this one during today’s post-game press conference.

“He’s a Columbus Ohio and East Lansing runner,” Tomlin said, referencing his high school and college upbringing. “That was one of the things that attracted us to him in the draft process. These environments are not foreign to him. As a matter of fact, he relishes the opportunity to perform in them.”

And perform he did. As our Matthew Marczi wrote, Bell had the greatest rushing performance in Steelers’ history which is something I think I’m just starting to wrap my blogging mine around. 236 yards on the ground. 298 total. Three touchdowns.

It’s a level of dominance you might only see once or twice a year around the league. But Tomlin also made sure to give credit to the Band of Brothers who opened up massive holes for the back.

“Can’t say enough about the run game. And when I talked about the run game, it’s not just Le’Veon Bell. Our guys up front did a heck of a job. Fullback Rosie Nix. Our big personnel packages they did a good job of blocking a myriad of fronts. Because as the game wore on, they threw a lot at us.”

If offensive lines are judged based on the stats of those around them, then you’d be hard-pressed to find a better job by any group this year. Bell averaged 6.2 yards per carry, Roethlisberger wasn’t sacked and only hit one time the entire game. Over the past month, he’s only been sacked twice, perhaps a career low.

The Steelers are winning up front. And in turn, they’re winning games.