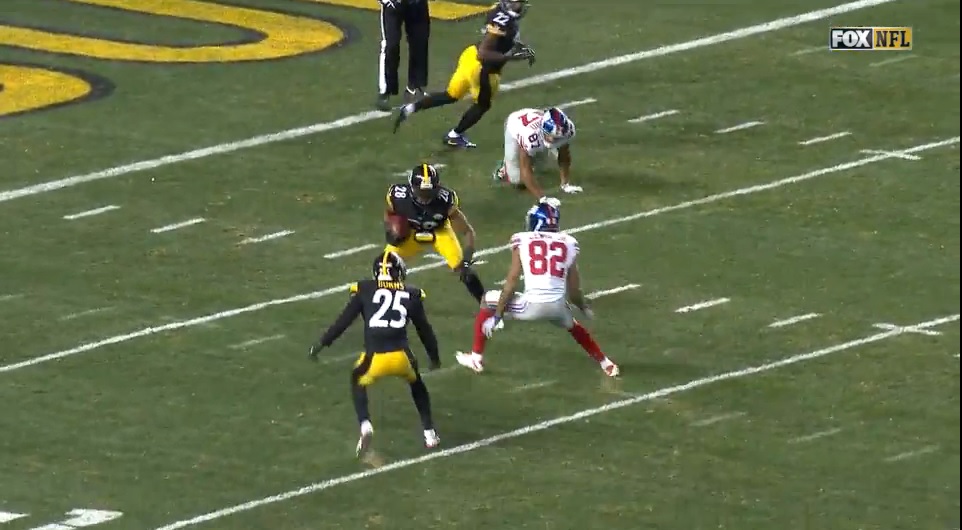 The Pittsburgh Steelers defense faced a huge test Sunday in their game against the New York Giants and not only did they pass it, they did so with several of their rookies making significant platys.

In the teams’ 24-14 win over the Giants, the Steelers defense held Giants quarterback Eli Manning to just 195 passing yards and intercepted him twice during the game to boot. Not only that, the defense held the Giants offense to just 56 rushing yards in the win.

After the game was over, Tomlin was asked to give his thoughts on how the defense played against the Giants.

“I just think we’re finding our rhythm,” Tomlin said. “I think we’re gaining continuity with the mix of guys that are playing. The young guys are growing up and by the young guys I mean Hargrave and Burns and Davis. But just generally, I think it’s about the cohesion and the guys are gaining rhyme in that way in terms of not only knowing what they’re doing, but knowing what’s going on around them. I think that allows them to play harder and faster and that’s what we need. That produces the atmosphere where big things happen for us.”

In total, rookies Artie Burns, Sean Davis and Javon Hargrave combined to have 16 total tackle against the Giants. Davis had a few nice run stops in addition to his first career interception. Burns, on the other hand, covered well on the outside and did a great job of limiting Giants wide receiver Odell Beckham Jr. to minimal yardage after his receptions.

As for Hargrave, he also seemed to be playing well prior to leaving the game in the first half with a concussion.

The Steelers defense managed to not only sack Manning twice during Sunday’s game, they also were able to provide some consistent pressure on the quarterback. Because of that, Tomlin was asked after the game if pressure up front on the defensive side of the football was a big contributor to the units’ overall success in the game.

“I thought the coverage was great also,” said Tomlin. “When you play a guy as savvy and as seasoned as Eli [Manning], both is going to be required. You can’t lean on one. If you’re rush is great and your coverage is not tight, he’s going to make quick decisions. If your rush ain’t getting there, he’s going to find people as they come open, extended. I think we did both above-the-line today and I think collectively that’s what created the atmosphere.”

The fact that the Steelers defense had such a good game against a team with a great quarterback and dangerous wide receivers is very encouraging. Not only is the team continuing to win, they are doing so with all three of their top draft picks contributing heavily on the defensive side of the football. That’s all you can really ask for with four games remaining in the regular season.

“Hopefully,we can build upon this performance as we move forward,” Tomlin said after the game.