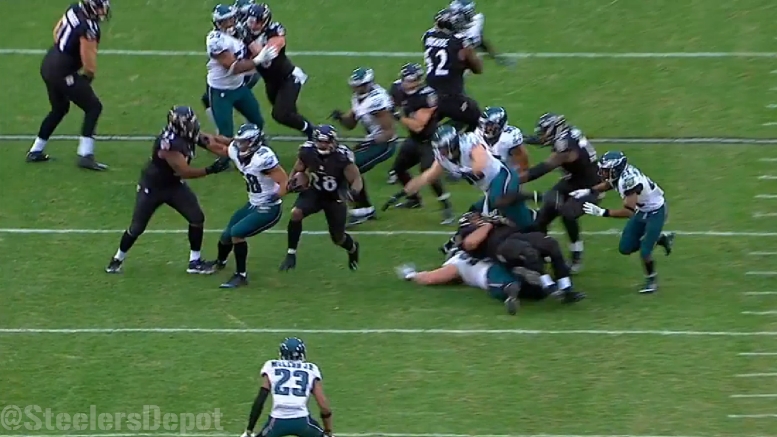 It doesn’t get a whole lot better for the Ravens when you consider the fact that they don’t run the ball as frequently as many other teams do. They are still averaging just 3.9 yards per carry on the season, which has them tied for the 23rd-best mark in the league in that category.

Of course, if you only look at season-wide statistical trends, you miss a great deal of the nuance that occurs in the ebbs and flows of every season. The Steelers, for example, had among the fewest sacks in the league at the start of the year, but have had the most sacks over the course of the past five games.

The Ravens’ running game tells a similar story, as they struggled to get it going for much of the season, and, in fact, it was a virtual no-show in the early portions of the season. But the ground game has come alive in recent weeks, and that should be a concern for a wounded Steelers defensive front line.

Baltimore did not do well on the ground at all the last time they played the Steelers, gaining just 50 yards on something like 29 rushing attempts. Since then, of course, they are averaging 102.5 yards per game, which says something about how poor their rushing offense was at the start of the season for 102.5 yards to pull their yearly average up to just 90.6.

The Ravens began committing to the run the game after the Steelers, rushing the ball 34 times for 119 yards against the Browns. It wasn’t incredibly efficient on a per-attempt basis, but it was a victory of attrition. The following game, they only ran the ball 16 times, but for 101 yards—quality over quantity.

It is interesting to note that it has been over the past five games that the Ravens moved Marshal Yanda from right guard to left guard after Alex Lewis was injured. Vladimir Ducasse has done a reasonable job at right guard since then.

In the last game against the Eagles, the Ravens picked up 151 yards on 24 carries, including runs of 41 and 39 yards, though one came on an end-around. The only mediocre showing was against the Patriots, but they hardly ran the ball in that game.

Meanwhile, the Steelers are facing the prospect of fielding a starting offense that includes Ricardo Mathews and L.T. Walton, or, if not one of them, when Daniel McCullers. Either way, all three are bound to play a healthy chunk of snaps in the absence of Stephon Tuitt, who while listed as questionable did not practice all week.

The defensive front seven held its own against the Bengals’ rushing attack in the second half after rebounding from the early loss of Tuitt. It may be asking a lot for them to do it for another game, and against a more physical offensive line, but is it asking too much? I suppose we’ll find out tomorrow.