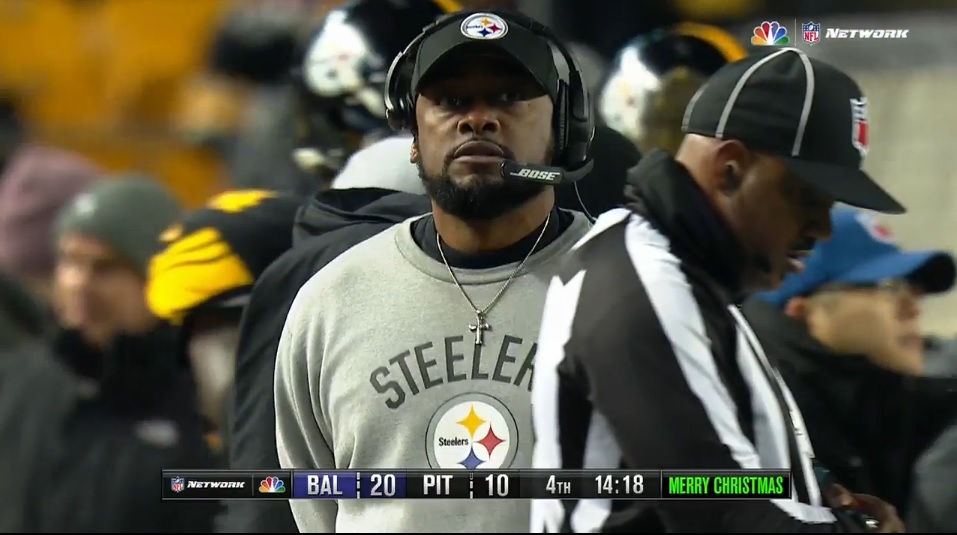 Talk about a very Merry Christmas for Steeler Nation!

Taking on the Baltimore Ravens in a pivotal Christmas Day matchup with a playoff berth and the AFC North division title on the line, the Pittsburgh Steelers needed some late-game heroics to pull off a thrilling 31-27 win, clinching the division title and the No. 3 seed in the AFC playoff picture with just one week to go in the regular season.

Like I do following every game, I’ll take a shot at trying to grade each positional group’s performance for the Steelers.

For roughly 42 minutes, Ben Roethlisberger played a very, very poor game, throwing two horrendous interceptions in the middle of the field in the second half to really put the Steelers behind the 8-ball against the Ravens.

Fortunately for Pittsburgh, Roethlisberger was able to flip the switch late in the game to lead the Steelers down the field on two final drives to lead them to the win. In those final two drives it appeared that Roethlisberger was able to play worry-free football and really started to click late with guys like Antonio Brown, Eli Rogers, Jesse James and Demarcus Ayers.

In a game that the Steelers really needed a big game from key players, do-everything running back Le’Veon Bell stepped up in a massive way on the ground, carving up the Ravens’ terrific run defense, rushing for 122 yards and a score on just 20 carries (6.1 yards per carry), providing the Steelers offense with great balance in the second half, making it difficult for the Ravens to slow down the Steelers.

Through the air, Bell hauled in just three passes for 15 yards, but on the ground Bell really left his mark. It couldn’t have come at a better time.

Brown came through with 10 catches for 96 yards, but none was bigger than his 4-yard touchdown from Roethlisberger to clinch the win, reaching across the goal line with three defenders hanging all over him in the process.

Early on the Steelers’ receiving corps really struggled to get open and help Roethlisberger as Brown had just one catch for seven yards and one massive offensive pass interference penalty in the first half before hauling in nine passes in the second half, playing a major role in the Steelers’ win.

Along with Brown, Rogers came up big in the second half, finishing the game with four receptions for 84 yards, including a big diving grab on the final drive across the middle of the field.

Ayers, getting his first action of the season, finished with just one catch for nine yards, but drew a big pass interference call, setting up Bell’s touchdown in the fourth quarter.

Xavier Grimble hauled in an early 20-yard touchdown to get the Steelers on the board on their first drive of the game, and James stepped up in a big way as a blocker and catcher, finishing with four receptions for 49 yards on five targets in the middle of the field while filling in for Ladarius Green.

No complaints here in terms of performance from a shorthanded tight end group.

This unit is really clicking at the right time, especially on the ground.

Although last week’s performance was a bit rough in terms of pass protection despite not giving up a sack, it was sort of more of the same in this one for this group.

Overall, the offensive line dominated on the ground and gave Ben time to throw, allowing no sacks once again while going up against one of the best defenses in football.

Despite being shorthanded against the Ravens, I felt that this group was decent overall.

I was really pleased with LT Walton and I thought that Johnny Maxey had some flashes for the Steelers, but at times the front line struggled to plug holes to stop the run throughout the game.

Javon Hargrave had a really strong game for the Steelers, finishing with four tackles and one tackle for a loss to lead the unit playing without Stephon Tuitt and Cam Heyward.

It seemed like Ricardo Mathews was never right early in the game and was very limited to do a lower body injury, which made this group even thinner, but credit to the guys who played; they fought hard.

Have yourselves a game, James Harrison, Ryan Shazier and Lawrence Timmons!

Yet again, this trio stepped up in a big way defensively to lead the Steelers defense to another win.

Harrison finished with 11 tackles and one tackle for loss, while Timmons (10 tackles, one sack) and Shazier (10 tackles, one interception) also made some big plays defensively to put the clamps on the Ravens.

Off the edge, Bud Dupree recorded a sack for the second time in three weeks, while Tyler Matakevich and Vince Williams came up with some big special teams tackles in the win.

Outside of the running game, Timmons and Shazier struggled at times in coverage down the seam, where Dennis Pitta had a big day for Baltimore.

The secondary had a tough time slowing down Pitta and Steve Smith Sr., but for the most part his young unit did a good job of allowing very little underneath to the Ravens before tackling the catch quickly.

Rookies Sean Davis and Artie Burns both finished with seven tackles, while Burns blew up a screen pass to Mike Wallace in a big way, setting the tone for the defense.

Mike Mitchell left the game briefly with back issues before returning to provide the physical presence in the secondary, finishing with five tackles, while Ross Cockrell added seven tackles.

Tackling overall defensively wasn’t the greatest, but this unit got it done top to bottom when it really needed to.

Chris Boswell was steady on field goals, hitting his only try from 36 yards while adding four extra points, but he was downright terrible on kickoffs, pushing two out of bounds to give Baltimore great field position near midfield.

Jordan Berry was only called on three times but averaged just under 46 yards per punt on the night, dropping one inside the 20-yard line.

In the return game, the coverage unit was much better for Pittsburgh as the Steelers were able to hold rookie Chris Moore to just one return for 19 yards, capped off by a massive hit by Williams.

Michael Campanaro was able to have some modest success returning punts for the Ravens (two for 25 yard), but overall the units were steady in the win.

This is for all of those calling for Mike Tomlin to be fired. How does five division titles in ten seasons sound? Not bad, eh? Especially in a tough AFC North. He might be overrated nationally, but he’s a good coach who’s had tons of success.

It’s time to cool the jets on asking for Tomlin’s head.

Oh, and by the way:  he’s the best cheerleader I’ve ever seen.