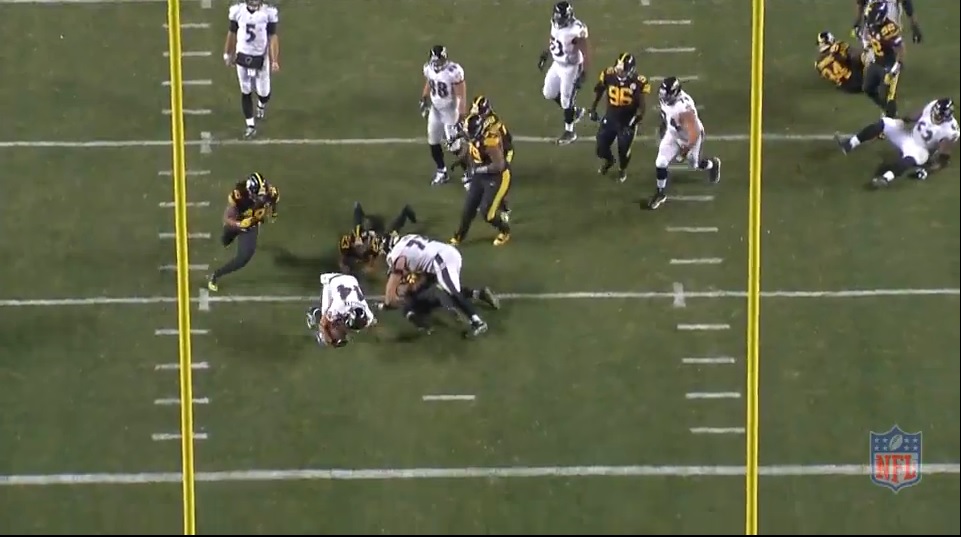 Sunday’s rivalry matchup with the hated Baltimore Ravens ended in favor of the Pittsburgh Steelers, giving the black and gold a fifth AFC North division championship under Mike Tomlin in his ten years at the helm.

While things look nice on the scoreboard and in the trophy case, what wasn’t so great was the tackling display put on by the Steelers in the biggest game of the season to this point.

Against Baltimore, Pittsburgh had its worst performance in the missed tackles department, turning in a season-high 21 missed tackles. Fortunately for Pittsburgh though, the Steelers were able to overcome some shoddy tackling to win the AFC North crown, clinching the No. 3 seed in the AFC playoff picture.

With that said, let’s take a look at some of the highlights of the missed tackles report.

Starting with the inside linebackers, I can understand if those numbers are extremely alarming to most readers, but on the flip side, Ryan Shazier and Lawrence Timmons were all over the field on Sunday reeking havoc in the Baltimore backfield on more than one occasion.

As I wrote last week, Shazier’s speed getting into the backfield can be a boon to his tackling abilities, especially in the open field, and that popped up again in multiple situations on Sunday.

While Shazier’s speed can hinder him at times, Timmons’ loss of some speed at this point in his career has hindered him as well. A few years ago Timmons is able to fill holes quickly to make physical tackles, but at this stage in his career he’s often in position to make arm tackles being half a step too slow.

That’s not a knock whatsoever because I believe Timmons is playing some of his best football as of late, but you can’t deny he hasn’t lost a step or two.

In this clip above, Timmons does a nice job of reading the play on 3rd and 1, lining himself up for a clean shot at Terrance West, but by sliding over into the hole just a half step late, Timmons is forced to be overaggressive, diving at West’s legs, allowing the Baltimore running back to spin back into the middle of the field for a key first down.

This type of play here from Shazier has become a common occurrence throughout his career.

At the snap, Shazier is able to find the seam to get into the Baltimore backfield on the zone run, giving him a one-on-one shot with the rookie Kenneth Dixon.

The fourth-round pick was a slippery running back to bring down all game long for the Steelers as he was very shifty in tight areas. Dixon is able to use Shazier’s speed into the backfield to his advantage, using a subtle juke move to force Shazier to bounce off of his strong legs.

Fortunately for Pittsburgh, James Harrison is able to clean up Shazier’s miss for a minimal gain.

In similar fashion to the Week 9 matchup in Baltimore, Steve Smith Sr. was able to force Mitchell into a big missed tackle in the middle of the field, leading to an explosive catch-and-run for the veteran receiver, who announced his retirement on Wednesday effective at the end of the season.

Along with Mitchell, rookie corner Artie Burns also misses a tackle on the catch-and-run and takes some of his frustration out on Smith at the end of the play, drawing a personal foul penalty in the process.

Mitchell wasn’t done though in a big spot.

Mitchell, who prides himself on being the physical presence for the defense, has good form to start the tackle, but he fails to bring his feet with him, allowing Juszczyk to keep his feet moving to power through his tackle attempt for what looked to be the biggest missed tackle of the season.

Fortunately for Mitchell, Ben Roethlisberger, Antonio Brown and Eli Rogers were able to make up for his missed tackle, moving down the field through the air to give the Steelers the win.

If the offense isn’t able to score the game-winning touchdown, Mitchell likely never lives that tackle down for the rest of his playing career.