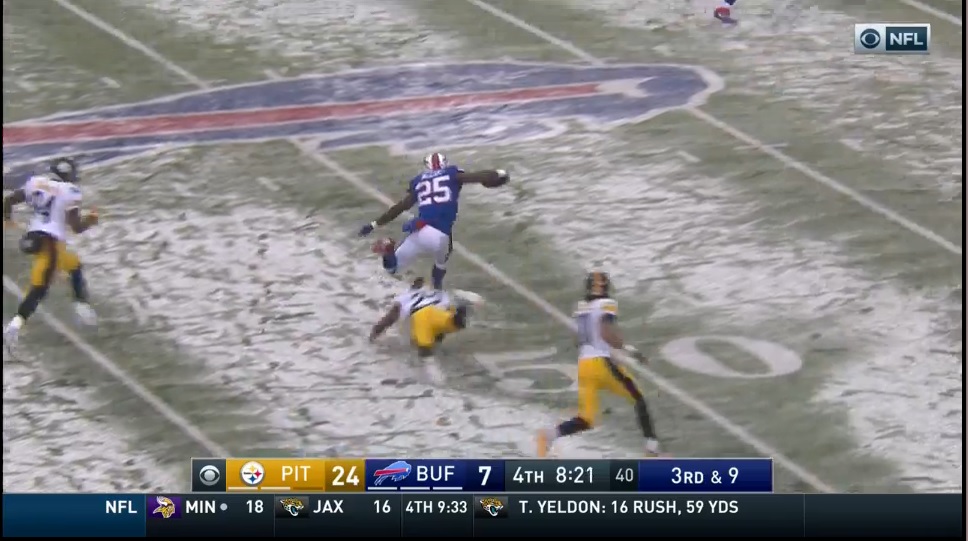 While Sunday’s win over the Buffalo Bills was wholey impressive for the Pittsburgh Steelers, there was a bit of a letdown in the fourth quarter defensively as the Steelers struggled to close the game out from a tackling perspective.

Let’s start with the elephant in the room:  two of Pittsburgh’s best defensive players in Ryan Shazier and Stephon Tuitt had rough games from a tackling perspective despite standing out as two of the top guys on the defensive side against the Bills.

It’s becoming more and more evident with Shazier that his speed is both a blessing and a curse as the fourth-year linebacker flies all over the field making play after play, yet can come up with a few misses here and there.

Same goes for Tuitt, who gets into the backfield so fast at times that he’s often unable to break down to make stops, racking up missed tackles based on my judgment.

At the snap, Shazier reads the run so well, allowing him to dart into the backfield unimpeded for a shot on LeSean McCoy. By coming in so fast, Shazier overruns the Buffalo running back deep in the backfield.

It’s a clean shot for Shazier, so it’s a tackle that he has to make. Fortunately for Shazier, LT Walton gets into the backfield quickly as well, allowing him to clean up the play.

I don’t know where to start with this play. There are so many missed tackles on this scramble by Taylor, starting with a missed tackle by Bud Dupree. Dupree is in great position to make the stop, but the slippery Taylor is able to escape.

Once Dupree misses the sack, cue yakety sax for this Steelers defense.  Near the end of Taylor’s scramble, Tuitt, Walton and James Harrison all miss, but fortunately Dupree doesn’t give up on the play and tracks down Taylor for the sack.

This was an absolute embarrassment of a play on a day in which the defense mostly dominated.

I’m sure you’ve seen the Sean Davis-William Gay gaffe to allow Charles Clay to score multiple times at this point, so I won’t bother breaking it, but with that said, it certainly seemed like the young defense took its foot off the gas late, allowing the Bills to break tackles and run mostly free through the defense, allowing the Bills to get back into the game late.