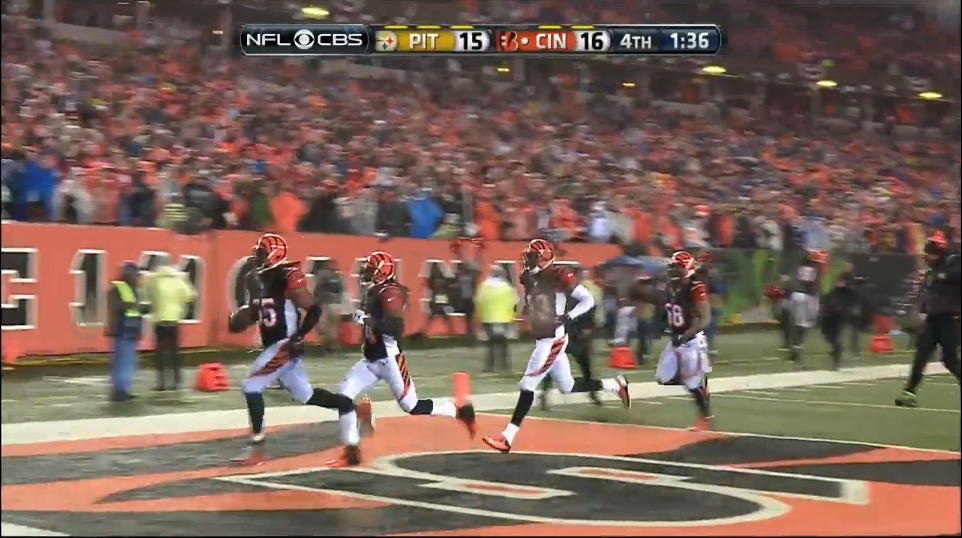 New series we’ll do each Sunday morning before kickoff. A prediction of what will happen if the Pittsburgh Steelers win, if they lose, and my final score prediction. My outlook on this afternoon’s game against the Cincinnati Bengals.

The Steelers Win If…

– They control the seams. That’s where the Bengals two biggest weapons, Tyler Eifert and Tyler Boyd. No A.J. Green is a big benefit and allows Keith Butler to focus on those two guys. Play a lot of MOF closed, single high safety, to take that away.

And on third down, watch out for those option routes with Boyd. He’s Andy Dalton’s number one target and having a really good year. Veteran William Gay needs to shut the rookie down.

– They win the point of attack. Similar to last week though of course, if they’re excelling at that level, it goes without saying they’ll come away with a victory. The Bengals let you run on them, more worried about giving up the big play through the air. So the front five, the tight ends, and Roosevelt Nix need to put in similar work this time around.

– Ben Roethlisberger has free throwing lanes. The Bengals’ defensive line has the most length in the entire league. Carlos Dunlap has more pass deflections than most defensive backs in the league. You don’t want to throw the third and 5 pass over the middle his or someone else’s arms, killing the drive or worse, creating a turnover. Big Ben isn’t the biggest guy on the field this time around and the line will need to create sight lines for him. Knock the DL’s hands down and don’t let them jump. Two big keys.

– The Bengals’ “games” get the OL in trouble. This is a bit of an offshoot of that final point above. Cincinnati is moving their defensive around even more than usual and they run a lot of stunts and twists when they opt against blitzing.

Communication is going to be more challenging on the road with the crowd going crazy and the Steelers forced to use a silent count throughout.

– Cincinnati wins in the pre-snap game. Though Hue Jackson is gone, the offense still has some of their typical hallmarks. I have seen a little less of the creative formations and pre-snap trades and shifts but when you’re playing a team like Pittsburgh, who knows you inside and out, you have to add wrinkles.

The Bengals do a nice job of using motion to try and misalign defenses and moving receivers around in an attempt to ID coverages. Maybe not even for that particular play but for later in the game.

– Vontaze Burfict’s return helps the run defense. Like him or not, I know you don’t, Burfict is a really talented, three-down type of player. He makes life difficult for teams before the whistle, not just after. I’m surprised the defense is struggling as much as it has all year though as Paul Dehner Jr. told the guys on The Terrible Podcast, things have normalized over the last few games.

I like a lot of the talent on that side of the ball. George Iloka. Shawn Williams. Adam Jones. Dunlap and Geno Atkins. They’re all a threat to produce some big plays.