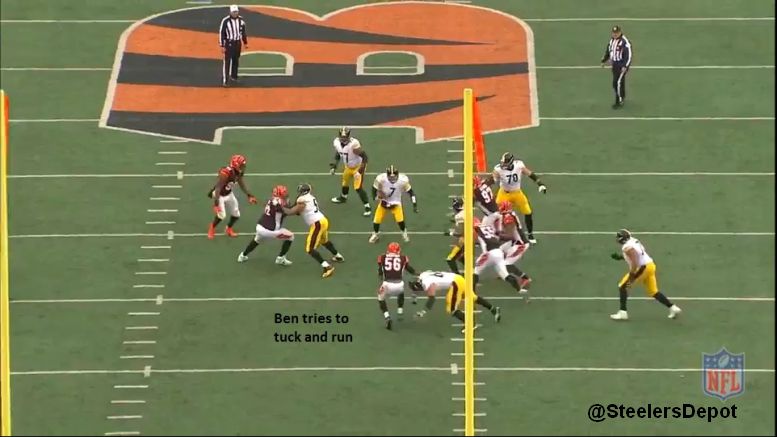 Back at it for our sack breakdown though I promise this will be the shortest one we ever do. Only one given up by the Pittsburgh Steelers this week and it didn’t come in a traditional fashion. Let’s take a look.

Not even going to talk about blockers and rushers. This is supposed to be a TE middle screen to Ladarius Green. Not my favorite call in the world but one that’s in the playbook and has been used before.

Credit to the Cincinnati Bengals for snuffing it out. RDE Michael Johnson sticks to Green and seems to grab his arm too. Maybe a slight hold but one any defense is going to get away with. Immediately, the play is a bust. 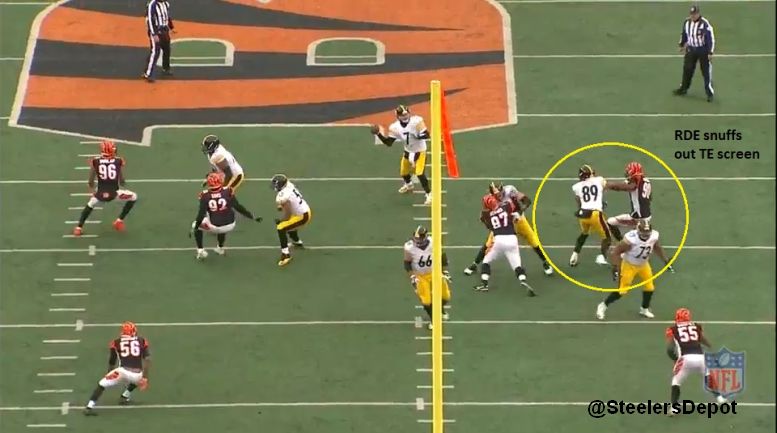 I don’t get why Ben Roethlisberger didn’t throw the ball at Green’s feet and simply end the play. He’s definitely done it before. No grounding, no potential for a negative play outside the incompletion. Instead, he tucks the ball and tries to dive back to the LOS, falling into the pile.

Green gets shoved by Vontaze Burfict and the tight end comes off gimpy on the play. Just a mess all around. It goes down as a sack, a one yard loss. Not a conventional one but it’s counted so we will do the same. The blame is pretty clear here. The Bengals killed the play but there was no reason for Roethlisberger to hold onto this football.