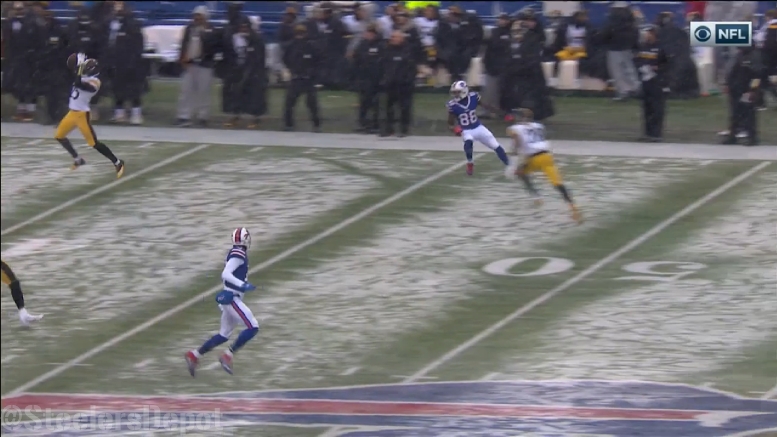 During the course of the Pittsburgh Steelers’ winning streak, which has coincided with them solidifying their top three draft picks into the starting lineup on defense, the Steelers have only allowed their opponents to score a total of 50 points against them, with some of that scoring coming late in games while the result was fairly close to settled.

Pittsburgh’s rookies have played a big part in that defensive turnaround as well, contributing, in combination, three interceptions and three and a half sacks, as well as a fumble recovered for a touchdown, with each of their three draft picks—first-round cornerback Artie Burns; second-round safety Sean Davis; and third-round defensive tackle Javon Hargrave—getting into the action.

Burns actually leads the Steelers with three interceptions on the season, including the one that he had on Sunday against the Bills. He also recorded an interception in Cleveland at the start of the Steelers’ win streak, and the previous interception came two weeks prior in a loss to the Ravens.

As for Davis, he got his first interception of his career last week, and on Sunday, he chipped in for a sack and a half. He has been the only defender to play every snap on defense over the course of the past couple of weeks, in addition, displaying his endurance.

Rookie third-rounder Hargrave has been sidelined for most of the past two games after he sustained a concussion early in the Steelers’ victory over the Giants, so he has not had as many opportunities to contribute to the team’s recent successes as have his draft classmates in the secondary.

In the two games in which he did log a significant number of snaps, however, he recorded a sack in each of those games, in addition to several other pressures, and he was also the one who recovered a fumble following a sack in the end zone for a touchdown, the team’s only touchdown thus far on the season that wasn’t scored on offense.

There have been a couple of others, however, that have been called back, including one on Sunday, which was negated because Burns was penalized for holding on the play. Davis had a fumble recovery against the Browns that he scooped and scored on, only to have it wiped out by a roughing the passer penalty, in addition.

I don’t suspect that anybody predicted that the season would unfold this way for the top end of the Steelers’ rookie draft class, with all of them closely solidifying themselves as starters on this defensive unit. While they have had their growing pains, the numbers that they have been putting up are valuable.

Both Burns and Davis are also closing in on nearly 50 tackles on the year, and both of them have improved their tackling ability from the start of the season. Hargrave has recorded 20 tackles of his own, even if he has missed out on some of his best opportunities for playing time. Right now, it’s hard to argue against the top of the Steelers’ draft class this year. They are not just playing; they are producing.