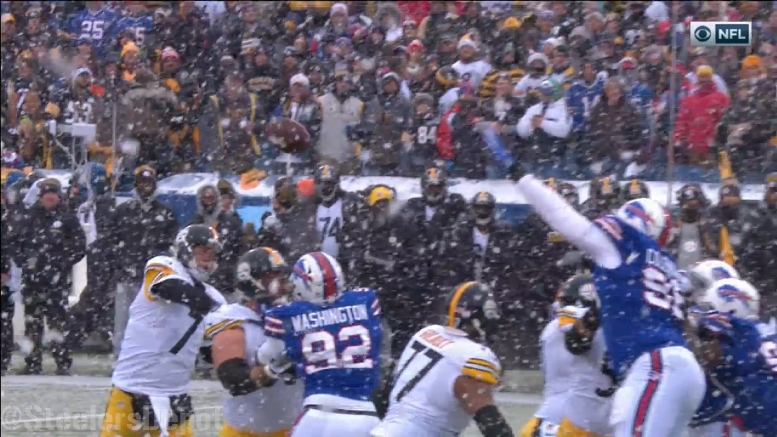 The Pittsburgh Steelers have one final game during the regular season away from Heinz Field, and that takes place tomorrow in Cincinnati. Ohio native Ben Roethlisberger typically plays well in his home state, but it has been a mixed bag of late.

Last season, in the middle of a late-season three-game win streak, Roethlisberger completed 30 of 39 passes against the Bengals’ defense in Cincinnati for 282 yards, averaging 7.2 yards per pass attempt. But he threw an interception and did not get into the end zone. Two rushing touchdowns and a pick-six, plus a quartet of field goals, tallied up their end of a 33-20 victory.

During his trip to Cincinnati in the 2014 season, however, he was exceptional, completing 25 of 39 pass attempts for 350 yards and throwing three touchdown passes versus no interceptions, and no sacks, which kicked off a four-game win streak to close out the season and take the division.

Overall, there can be little said about Roethlisberger’s road performances over the course of the 2016 season other than inconsistent. In spite of the fact that they have come away with victories in their past three trips away from Heinz Field, the numbers from the quarterback position have been fairly pedestrian.

In seven games on the road this year, Roethlisberger has been completing just a tick below 60 percent of his pass attempts while averaging fewer than 6.6 yards per pass attempt. He has thrown only eight touchdowns to eight interceptions—of course, his 0-to-3 ratio in that category up in Buffalo did not help matters.

He has had some good games on the road—he threw three touchdowns apiece in Washington and Indianapolis, throwing for 300 yards in the former and 11 yards per pass attempt in the latter—but he has also had some dismal affairs to balance that out, including all three games in which he has thrown multiple interceptions on the year.

There is one final game away from Heinz Field during the regular season for the Steelers—and for Roethlisberger—to make the case that they can take their show on the road. It may be small consolation that his two best performances also came against arguably the two of the three best opponents they have faced on the road—though not the best defenses.

The Steelers started the year out going 1-3 on the road, but have since won their past three. They can secure a winning road record for the season tomorrow by taking down the Bengals, which, on paper, should be pretty manageable. But I think the bigger implication will be what it says about how they expect to travel.

It’s overwhelmingly unlikely—perhaps already impossible—that the Steelers can guarantee a postseason in which they don’t have to leave Heinz Field. They may get a home game in the Wildcard round, but they must show that they can enforce their will in anybody’s home turf. They have not done that enough this year.