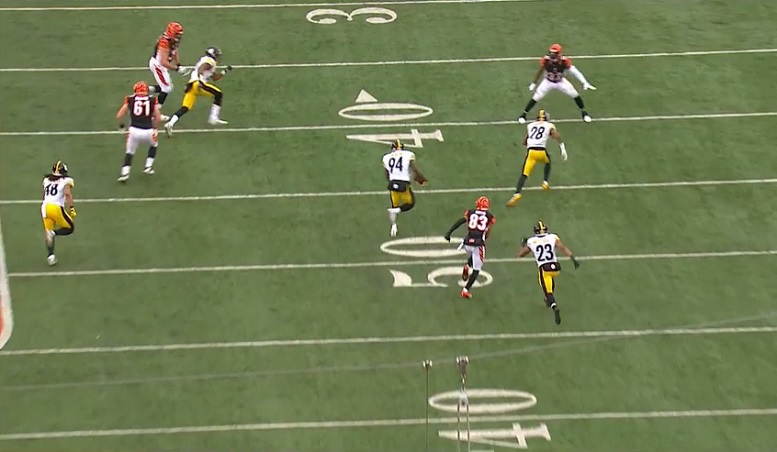 Through all the despair and redemption this season, we’ve come to recognize that the 2016 Pittsburgh Steelers are a very streaky team. While their earlier four-game losing streak and current five-game winning streaks are garnering the most attention, here is one you’ve probably missed. The Steelers have now forced a turnover in eight straight games.

Lawrence Timmons’ critical 3rd quarter interception off Andy Dalton was the catalyst for extending their takeaway streak to eight straight games, the third longest active streak in the NFL. While eight games are still very far off from the Steelers all-time record of 44 straight games with a takeaway, set from 1985 to 1988, it is another element of turnaround for the Pittsburgh defense.

After recording just six takeaways in their first six games, the Steelers have forced 12 in their last eight games. But it is not just the number of takeaways but also the timing of the takeaways that are impressive. Ten of the twelve Steelers takeaways during this eight-week stretch have come during the first or fourth quarter, providing either an early boost or a game changing swing.

The lone two takeaways that did not occur during the first or fourth quarter are nothing to write off about either. These two takeaways were perhaps the most important takeaways of this stretch. One being the previously mentioned Timmons interception which occurred while the Steelers trailed the Bengals. The other takeaway also came at the hands of Timmons, his red zone interception of Eli Manning a few weeks ago helped swing momentum in the Steelers’ favor, momentum that they never lost.

While the momentum of eight consecutive games with a takeaway is a great sign for the Steelers, it is the opportunistic composure of the defense that steals the spotlight. Not only are the Steelers forcing more turnovers, but they are also coming at the right time.

Speaking of the right time, there would be no better time for the Steelers to extend this takeaway streak than Christmas Day against Joe Flacco and the Baltimore Ravens.