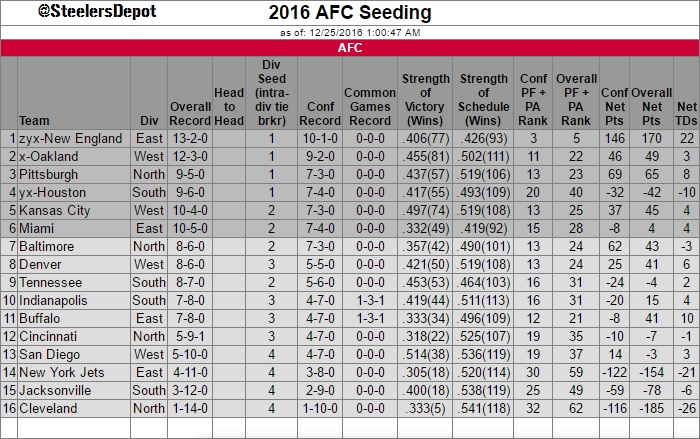 The Pittsburgh Steelers will host the Baltimore Ravens Sunday night at Heinz Field and as you would probably expect, it’s a big game for both teams. In case you’re curious about the playoff scenarios related to the Steelers heading into Sunday’s game, I have them below for you.

As far as the AFC North division goes, it’s really quite simple as the Steelers can clinch it by beating the Ravens Sunday night. That would also result in the Ravens being officially eliminated from playoff contention. If the Ravens were to beat the Steelers, however, Pittsburgh would need to either beat or tie the Cleveland Browns in Week 17 and hope that Baltimore loses to the Cincinnati Bengals during the final week of the regular season in order to win the AFC North.

So, what if the Steelers lose to the Ravens and Baltimore beats the Bengals in Week 17? Should that ultimately happen, the Ravens would win the AFC North and the Steelers would then be battling for a Wild Card spot.

There are a few paths the Steelers can take for a Wild Card spot should they lose to the Ravens Sunday night and both would obviously include them needing to beat the Browns in Week 17. Both paths start with them needing the Kansas City Chiefs to lose to the Denver Broncos Sunday night. If the Chiefs win or tie that game against the Broncos, they would secure a Wild Card spot and so would the Miami Dolphins. At that point, the Steelers would need to beat the Browns and hope that the Ravens lose to the Bengals in Week 17.

If the Chiefs lose to the Broncos Sunday night, it would open up two paths to a Wild Card spot for the Steelers should they need them. One path would include them beating the Browns and the Chiefs losing to the San Diego Chargers in Week 17.

If, however, the Chiefs were to beat the Chargers in Week 17 after losing to the Broncos Sunday night, the Steelers would then need the Broncos to beat the Oakland Raiders and the New England Patriots to beat the Dolphins during the final week of the regular season in order for them to secure a Wild Card spot if they beat the Browns.

If you would like to double-check these, you can use the two playoff scenario generator machines below.