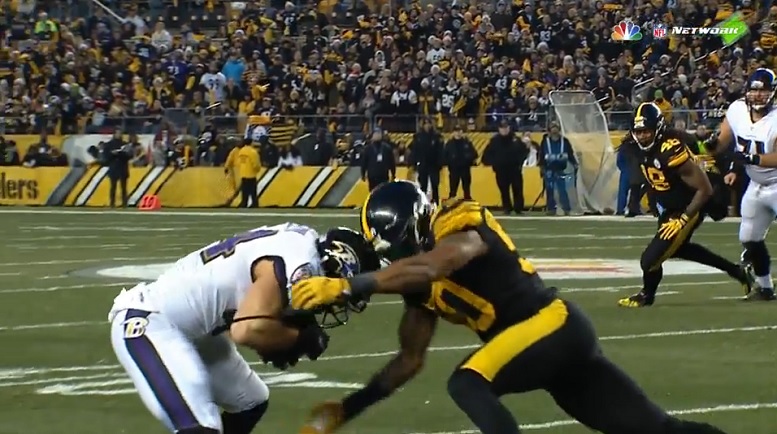 Pittsburgh Steelers linebacker Ryan Shazier was penalized for hitting a defenseless player during Sunday’s win over the Baltimore Ravens and while he was flagged for unnecessary roughness on that play, the former first-round draft pick reportedly wasn’t fined by the league for it.

Ryan Shazier said he did not get fined for his unnecessary roughness hit on the Ravens FB.

With 51 seconds left in the first quarter of the Steelers game against the Ravens, Shazier hit Baltimore fullback Kyle Juszczyk right after he had caught a short third down pass from quarterback Joe Flacco. While Shazier did hit the fullback helmet-to-helmet immediately after the catch was made, it really was unavoidable being as Juszczyk dropped his head right before impact.

Immediately after the play was over, former NFL head coach Tony Dungy gave his thoughts on whether or not Shazier should have been penalized during the television broadcast replay of the hit.

“I have to agree with Mike Tomlin on this. I don’t like this call,” Dungy said. “I thought Ryan Shazier did an excellent job in coverage. He’s going in to make the tackle, Kyle Juszczyk drops his head, there’s nothing the defender can do on that. He doesn’t lead with his helmet — well, he does, but the defender has no chance at that play. By the rule, that is technically the call, it’s just a shame.”

Nearly one full year ago, Shazier had a somewhat similar hit on Cincinnati Bengals running back Giovani Bernard during the AFC Wild Card game and while he wasn’t penalized on that play, the NFL has since changed the rule. NFL vice president of officiating Dean Blandino told reporters during the NFL owners meetings that hits like Shazier’s on Bernard would now be illegal.

“We looked at it and we looked at a lot of plays that involved potential crown-to-the-helmet hits, and the way the rule was put in, there was some concern that we were going to have a real spike in penalties,” Blandino said earlier this year, according to an ESPN.com report. “It didn’t play out that way because the directions to game officials were very specific in three elements for that rule. We have to line up your opponent, lower the head and then use the crown of the helmet to make forceful contact. So it really had to be two players moving in the same direction.”

Blandino would go on to say more about why last year’s hit by Shazier on Bernard was not a penalty then but is now.

“If there were angles involved, it wasn’t a foul,” Blandino explained during the offseason. “[But] we look at that hit, that’s not a technique that we want in the game. So we’re changing the interpretation of that rule; whereas for the defensive player, it’s not about angles, it’s about lowering the head and using the crown of the helmet. So outside of the tackle box, really, that hit will become a foul — forceful contact, clear crown, regardless of whether there’s angles involved for the defensive player.

“We still feel that the offensive player, the runner, in many instances is not being able to protect himself, so we want to see that line up for the runner.”

So, is Shazier not being fined for his Sunday hit on Juszczyk an admission by the league that it wasn’t actually illegal? It’s hard to say at this point.

As for a penalty being called on Shazier on that play, it kept the Ravens drive alive as they would have had to punt otherwise. Luckily for the Steelers, the Ravens drive ultimately ended without any points being scored thanks to a high snap that wasn’t handled during a field goal attempt by Baltimore kicker Justin Tucker.

As the old saying goes, the ball don’t lie.