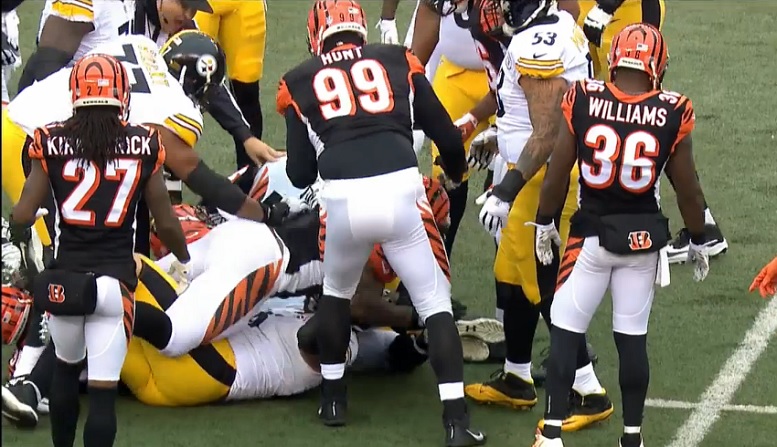 While Sunday’s game between the Pittsburgh Steelers and the Cincinnati Bengals won’t go down as one of the dirtiest played contests between the two teams, it did include a little extracurricular activity nonetheless. At least two Steelers players have been fined for their actions in that game and they are tackle Marcus Gilbert and defensive end Stephon Tuitt.

According to Ray Fittipaldo of the Pittsburgh Post-Gazette, Gilbert was fined $9,115 by the league this week for his second half unnecessary roughness penalty against Bengals linebacker Vontaze Burfict. Gilbert talked about his penalty and how he thought the Bengals played dirty once again after the game was over.

Marcus Gilbert was fined $9,115 for his unnecessary roughness penalty against Burfict, who was not fined at all.

“We knew they were going to try a lot of cheap shots and we have valuable players on our team we can’t get hurt,’’ Gilbert said, according to Ed Bouchette. “We had to protect them. As offensive linemen, that’s what we get paid to do. We had to make a statement that we ain’t going to tolerate none of this stuff, man.”

“Whatever his name, 55 [Burfict] was driving his helmet in the back of Le’Veon [Bell], he just kept digging and giving the extra elbow. I just got tired of it. C’mon, what are we talking about? We’re playing football. We ain’t going out there and trying to hurt anybody physically but we’re trying to impose our will on them. They can tap out but not the extra unnecessary stuff to try to injure players and have career-ending injuries.”

“You don’t play football like that. I’m sick of it.”

You can see the play below that ultimately pushed Gilbert over the edge. While Steelers guard David DeCastro was also pretty upset after that play was over and has since been accused by some Bengals fans of attempting to stomp the leg or foot Burfict at the end of that play, it doesn’t appear as though the league took any action against him at the time of this post.

As for Tuitt, he was reportedly fined $9,115 by the league for his first quarter facemask on Bengals quarterback Andy Dalton, according to Joe Rutter of the Pittsburgh Tribune-Review. On that third down play early in the game, Tuitt injured his right knee and never wasn’t able to return to action.