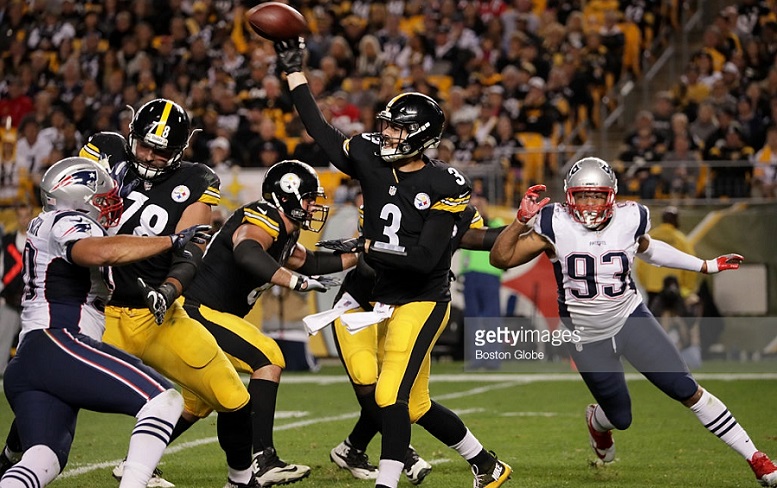 During his Tuesday press conference, Pittsburgh Steelers head coach Mike Tomlin gave every indication that quarterback Ben Roethlisberger will be one of several starters that will sit out the regular season finale against the Cleveland Browns. If that ultimately happens, backup quarterback Landry Jones will make his second start of the season and the fourth of his career.

Earlier this season Jones started for an injured Roethlisberger in the team’s Week 7 loss to the New England Patriots at Heinz Field and while he did complete 61.7 percent of his passes in that contest for 281 yards and a touchdown, he also threw an early red zone interception. Additionally, of the Steelers 12 offensive possessions in their game against the Patriots, seven of them lasted five plays or less.

Roethlisberger said Wednesday morning during his media session that he will help Jones prepare all week for the Browns and that he likes the growth he’s seen in his backup.

“Just his understanding of the offense, growth, play calling,” said Roethlisberger, according to Teresa Varley of steelers.com. “We can do no-huddle with him. Him being around here you see a lot of understanding of football, our offense, defense, and things like that.”

While Jones figures to have a few of the Steelers starting linemen in front of him on Sunday for a good portion of the game, he isn’t likely to have the services of both running back Le’Veon Bell and wide receiver Antonio Brown as like Roethlisberger, they’re expected to be held out against the Browns. Regardless, while Sunday’s game will be a meaningless one for the Steelers as a team, it will be a big game for Jones and perhaps his last shot to show that he can be more than just a backup in the league as the Oklahoma product is currently scheduled to be an unrestricted free agent come March, the start of the 2017 league year.

With the playoffs on the horizon, Jones probably needs to get as much work as possible against the Browns so because of that it’s hard to imagine that third-string quarterback Zach Mettenberger will get much, if any, playing time against the Browns. Mettenberger, however, will be active and in uniform on Sunday just in case he’s needed.