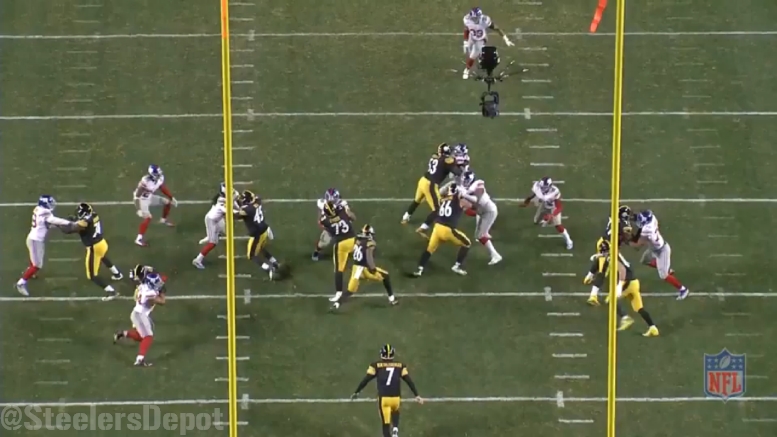 There has been some discussion this week, and over the past day or so, about Pittsburgh Steelers center Maurkice Pouncey and what sort of season he is having. While Pro Football Focus considered his performance against the Giants as one of the 10 best of the week, they did not rank him in their top 25 linemen of the season, while both of Pittsburgh’s guards did make the list.

I figured it might be useful to take a look at some of the plays from Pouncey in that Giants game in light of the aforementioned discussion, to give a better sense of how he played in that game that had PFF rank him so highly.

I think he first play of the game is actually a perfectly valid place to start, as it not only set a tone for the day, but it was also a fairly notable play for the seventh-year center. The Steelers ran out of a 12 look, with Le’Veon Bell lined up behind Ben Roethlisberger. It proved to be a screen pass, with Pouncey dashing to the perimeter off the snap, helping to block one defender with the tight end before moving upfield to advance on a second defender.

Another play later in the first quarter, and another running back screen, prominently featured Pouncey, so started the play with a chip block before working to the second level and waiting on a defender to pick up, giving Bell a wide berth around the right-side perimeter for a big gain, and just his fourth explosive play of the season.

Of course, the Steelers also focused a lot on running the ball, and they had as much success against the Giants’ front as anybody. Midway through the second quarter, with the help of his left guard to start, he was able to reach and seal off Damon Harrison to allow Bell to squeeze through a hole for seven yards.

Late in the first half, facing a third and long, it was yet another screen to Bell, this time picking up 14 yards. It wasn’t quite enough for the first down, but it made for a relatively easy field goal. Pouncey actually ended up blocking the same defender three times on the play.

The offense spent the fourth quarter more or less just trying to close out the game, so it featured a healthy dose of run-heavy packages, and a lot of Le’Veon Bell. After an eight-yard gain up the middle on first down, Pouncey got to the second level on second and two to seal off the linebacker, resulting in a four-yard gain and a first-down play.

It was a very solid game from the veteran center, who doesn’t seem to have had as many opportunities to run down the field as he may have had in years past. He is certainly having a fine season, though not one that I would say is his best, personally.