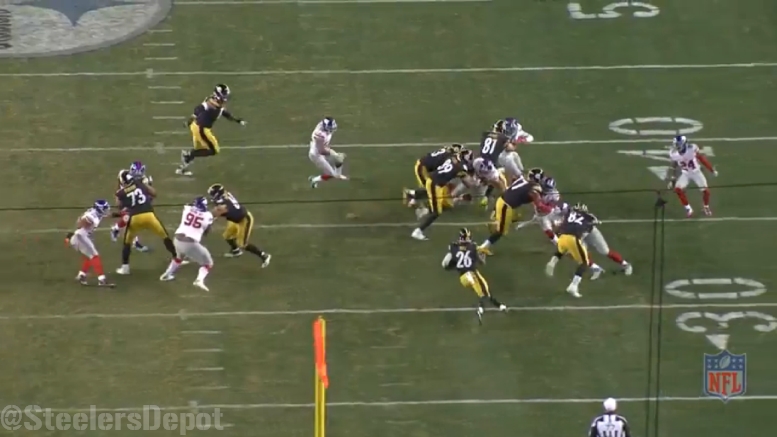 The Pittsburgh Steelers’ offense this season, outside of the period during which they were battling through Ben Roethlisberger’s knee injury, has been, for the most part, pretty stable. They have not put up quite as many points, perhaps, as many might have projected, but they have been relatively efficient outside of that midseason skid—and, of course, the blemish in Philadelphia.

It should not be surprising that a stable offensive line has been a big part of that, and Marcus Gilbert re-emergence into the lineup and playing back into form after missing three games due to a foot injury, and taking a couple of games to get his feet back under him, has helped solidify an overall strong offensive unit that has lately been more likely to be its own worst enemy rather than its opponents.

Gilbert helped to make his presence felt on Sunday starting with the first play from scrimmage when he successfully cut Giants left defensive end Jason Piere-Paul, which took him out of the initial heart of the play and forced him to chase down a screen after an eight-yard gain, allowing Le’Veon Bell to win the edge.

He also handled the former All-Pro on Ladarius Green’s long backyard-style 37-yard reception late in the first quarter. After Gilbert absorbed his initial bull rush, Pierre-Paul instead broke inside and then seemed to follow Bell, who was making himself available as a passing target after the initial play broke down.

Late in the first half, on the play on which Pierre-Paul actually injured his groin and likely ended his season, the Steelers picked up another 18 yards on a third and 17 play. On the designed screen, Gilbert let the defensive end fly past him while he himself looked to work upfield, and he found his blocking target, blanketing the Giants’ middle linebacker and providing the lane through which Eli Rogers could run.

Gilbert obviously spent the second half working against backups after Pierre-Paul left the game, but he handled them as you would expect. Remember that sideline catch by Antonio Brown late in the third quarter? That was made possible in part by the right tackle’s technician-like handfighting working against the edge rusher.

Of course, he did some run blocking as well, but the Steelers didn’t spend much time working to his side. He did manage to take out the safety on a sweep run right late in the game that picked up 19 yards, which was one of the Steelers’ longest running plays of the season.

Gilbert really transformed himself over the course of the past couple of seasons, even when we consider the fact that the biggest thing that has held him back over the course of his career has been repeated unfortunate injuries. But right now, he is playing at a high level, and it is helping the offense’s efficiency.