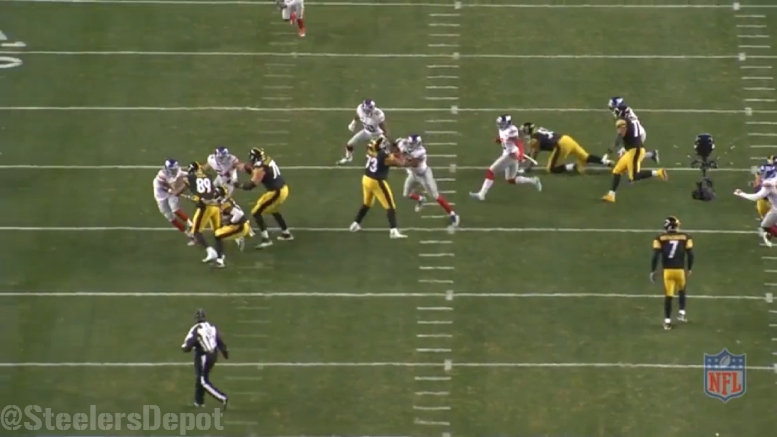 We have understandably talked a lot about Pittsburgh Steelers tight end Ladarius Green over the course of this past week, which tends to be what happens when a highly-valued player finally breaks through with a big game that has been anticipated since March.

In his first extended playing time of the year, in his fourth game, Green hauled in six passes for 110 yards and a touchdown, with three of those receptions going for at least 20 yards, and four of them converting on third down. Many are viewing this as a sign of things to come.

But, of course, there is another component of the tight end position, and that is the blocking aspect. That is what I want to focus on in this film session. While he didn’t have a ton of blocking opportunities on Sunday, there were enough to take a look at.

On a passing play late in the first quarter, Green set up as the lone tight end on the left of the offensive line. He drew responsibility for blocking the Giants’ prized free agent defensive end acquisition, who bull-rushed him back into the pocket. Because Ben Roethlisberger has to pump-fake the pass, it may have contributed to the incompletion.

Even later in the first quarter, Green was again the lone tight end, to the left, but this time on a running play. After chipping on the defensive end, Green got pushed backward, cutting of Le’Veon Bell’s path and forcing him to cut back inside. This was his lone negative run of the game.

Late in the second quarter, Green did get out in a caravan on a designed screen to convert on second and three, joining Eli Rogers in blocking for Antonio Brown. I do wonder, though, if he made the smart decision taking the outside lane rather than staying inside.

On the play midway through the third quarter on which Bell fumbled, Green—once again, as the lone tight end—shot up to the second level off the snap to try to pick off the middle linebacker. He did make connection, but the linebacker outmaneuvered him on his outside shoulder. He plugged up the hole through the middle, oh, and was credited with stripping the ball from Bell.

The Steelers spent most of the fourth quarter looking to drain the clock, which meant running the ball a lot. At their best, they managed to rattle off a 19-yard run from the 13 personnel. Green lined up as a wide receiver, but blocked instead, and worked his man—the defensive end—down the line and onto the ground.

I’m not sure, really, if we see anything here that wasn’t in Green’s scouting report as a block that Alex Kozora wrote up. I would imagine that he is definitely still kicking off some cobwebs when it comes to his blocking chops, so I would expect some improvement over the final month of the season—and it could definitely be used.