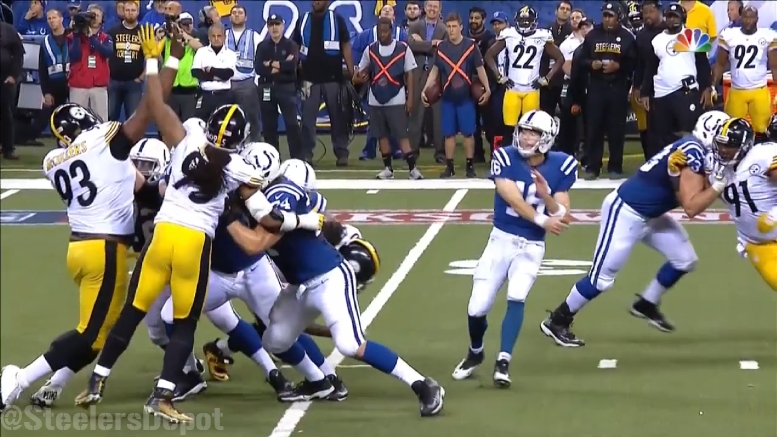 The Pittsburgh Steelers have not relied much upon third-year defensive tackle Daniel McCullers. Of course, they don’t have much of a role for him, either. He is primarily a 3-4 nose tackle, a front that the team does not often run in comparison to the amount of time that they spend with five defensive backs on the field—and, on top of that, he is second on the depth chart at that position.

But everybody has been betting more playing time in the past couple of games, because everybody has moved up in the pecking order following the season-ending injury suffered by Cameron Heyward, which has resulted in rookie Javon Hargrave absorbing the bulk of those snaps, as he is being used as a nickel interior rusher.

McCullers has been getting some opportunities lately, but one thing I could not help but notice that the Steelers did not utilize him much in obvious situations. Against the Colts, the home team ran eight plays on two separate drives with goal to go. McCullers played on only one of those snaps, a third and goal play from the one-yard line, which ended up being a bootleg run from the quarterback.

His workload was not significant overall against the Colts overall, which would be understandable, given that they did not use him in situations that would seem appropriate. And the situations that he did face did not always yield the desired results. But he did manage to use his bulk a couple of times to push the pocket, as on the play just before James Harrison’s sack late in the first quarter.

His one official quarterback hit occurred late in the third quarter, working as the nose tackle. He not only drove the center back off the snap, he also managed to push him aside, chasing the quarterback and forcing him to make a throw off his back foot and across his body.

Three of his snaps came in mop-up work at the end of the game, with the Steelers already having secured a three-possession lead, so they have to be graded on a bit of a curve, given the circumstances, with the outcome of the game essentially already determined.

One thing I will say about his first snap on the final three-play possession is that he showed a willingness to hustle, such that it was appropriate, on an outside run on the far side of his starting position. Not a particularly notable play, otherwise, but there was also not a lot to work from.

On the final play of the game, the Colts rattled off a meaningless 19-yard run, but I did want to note how McCullers was effectively neutralized and moved off the ball by a double-team block after he failed to set his feet at the point of contact.

I don’t know whether or not McCullers is ever going to see an increased workload at any point this season, or at any point of his career with the Steelers. He is capable of executing a limited role, but he also showed against the Colts more or less why he sees the number of snaps that he gets.