Merry Christmas to you and your family! Thank you for joining us on Christmas week and Fantasy Championship weekend as we prepare for the Steelers huge showdown with Baltimore. If the Pittsburgh Steelers win, they win the AFC North and will be assured of a home game in the 2016 Playoffs. If they lose, they are left hoping and praying that Miami and Baltimore would lose in Week 17 to get the last wild card spot. If there ever was a regular season, “must win”, this is it!

Pittsburgh has dropped four straight matchups to the Ravens. The streak must stop on Sunday at home if the Steelers want to do anything in the playoffs this year. From a fantasy perspective, the Steelers are back at home for their final two games after being on the road for four of the past five games. As we have stressed in this article all year long, this is the time when you want to play your Steelers on your fantasy team and DFS lineups.

Let’s start with Big Ben. Since the beginning of the 2015 season, Ben Roethlisberger has averaged 30.3 fantasy points per game at home compared to just 16.6 on the road. For those fantasy owners who own Ben Roethlisberger, this feels like one of those spots that he could blow up for 4 touchdowns. The only down side in analyzing this matchup is that both Sammie Coates (hamstring) and Ladarius Green (concussion) are listed as doubtful and will most certainly miss this game. On the other side of the ball, Ravens cornerback Jimmy Smith will miss this game with an ankle sprain, and the stats show that Smith’s presence drastically affects how Baltimore plays on defense. Take a look at these staggering splits from Warren Sharp of @SharpFootball on Twitter:

Take a look at the chart below from RotoViz. The “In Split” portion of the table on the left side shows just how successful Ben has been at home since the start of the 2015 season. 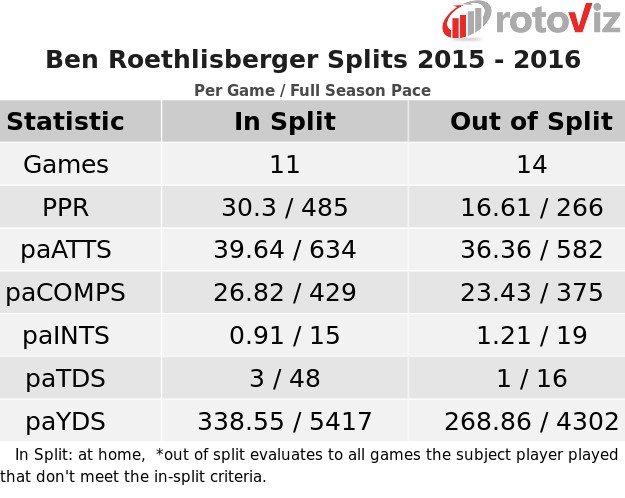 Roethlisberger is averaging 70 more passing yards per game at home, two more touchdowns and 14 more fantasy points per game in Pittsburgh. To me, Ben is the fantasy start of the week, and what better timing than fantasy championship weekend.

With or without Jimmy Smith, we do have to note that the 2016 Baltimore defense has been solid this season with Terrell Suggs returning from injury and the addition of safety Eric Weddle. Overall, Baltimore is 5th in total defense, allowing 312.6 yards per game. Through 14 games, the Ravens have surrendered 17.2 schedule adjusted fantasy points per game to opposing quarterbacks, which is 21st in the league. However, they are only allowing 245.9 passing yards and 1.7 touchdowns per game.

With Smith out, look for the Pittsburgh offense to work the passing game with a lot of Le’Veon Bell and Antonio Brown and a little Eli Rogers sprinkled in, culminating with a really nice day for Ben.

The wide receiver group in Pittsburgh has been in flux all season long aside from Antonio Brown. As soon as Sammie Coates was finally able to get back on the field against the Bengals, he pulls his hamstring in practice this week. Eli Rogers did step up in Cincinnati and should do so again this week.

As has been mentioned numerous times already, Jimmy Smith’s absence should open things up for a huge day for Antonio Brown. As Ben goes at home, so goes AB. Check out the RotoViz game splits app below to see how impressive AB has been at home since the start of 2015. 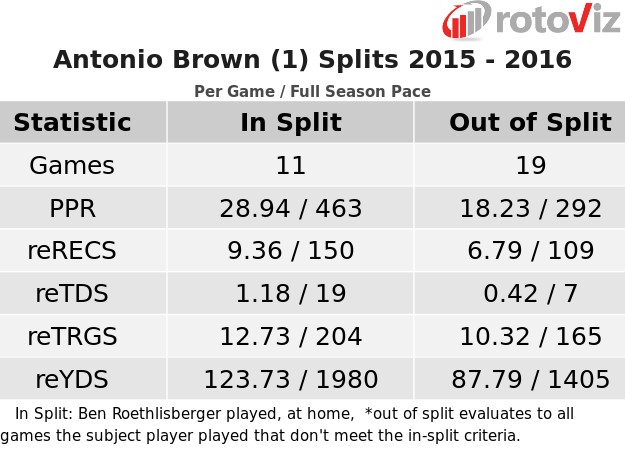 Brown averages more than 10 PPR fantasy points per game at home than he does on the road. This matchup sets up for well for an eruption spot for AB. Even though Brown has been relatively quiet recently from a fantasy perspective, you should be excited about him this week. Brown and Rogers are the only Steelers pass catchers that I am starting this week but both should have great weeks.

Jesse James gets another opportunity to be the Steelers starting tight end with Ladarius Green missing this game due to a concussion. The Ravens and their athletic linebackers have always been stingy against the tight end position.

This year they started out well but have given up some nice games to opposing tight ends recently. Last week, Zach Ertz went for 6 receptions for 80 yards, Martellus Bennett had 4 receptions, 70 yards and 1 TD in Week 14 and Tyler Eifert had 5 receptions for 68 yards and 1 TD in Week 12. The Ravens are now 21st in schedule adjusted fantasy points given up to opposing tight ends (12.9 points per game).

Obviously, Jesse James is not the talent that the tight ends listed above are but James does have a chance to get involved in the passing game here with Coates and Green out. I am not recommending starting James in any way, but he could be a part of Ben’s big day in this contest.

Le’Veon Bell continues to rumble on his way to an MVP caliber season. Bell has never had huge success against Baltimore but he will be heavily involved in the rushing and passing game this week.

Look for Bell to get into the endzone and see a heavy workload on Sunday as the featured offensive weapon against Baltimore. He is worth paying up for in daily leagues even in a relatively tough matchup.

Kicker Chris Boswell was simply incredible last week in Cincy. He was so good that he got “randomly” drug tested this weekend. After making 6 field goals last week, many will run to start Boswell this week but be warned that Baltimore is one of the toughest matchups in the league against kickers, allowing only 5.8 fantasy points per game to kickers. Boz will likely have a little bit more quiet game this week.

The Steelers have an opportunity to ring up points against this Baltimore defense just like the Patriots did two weeks ago. Pittsburgh at home is a green light for me to start them in my fantasy lineups. I believe the Steelers will have a solid performance in their Black color rush uniforms and help fantasy owners win this week. Thank you all so much for being with us this season, we appreciate your support. Again, Merry Christmas to you all!