The Pittsburgh Steelers return home this week for this game against the Giants sandwiched in between two road games on either side of this contest.

Ben Roethlisberger and Eli Manning face off for the 4th time in their careers in a pivotal matchup for both the Steelers and the Giants as they look to start a December run toward the playoffs.

The Steelers enter this matchup 3-2 at home and will need to win the remainder of their home games this year to finish 6-2 at home as they have the past two seasons. The Giants enter this game winners of six straight. The Steelers have won two straight after dropping four straight.

The Steelers will face a tough Giants defense this week that is ranked 16th in the league based on yardage allowed but has plenty of playmakers to the tune of 25 sacks and 10 interceptions. It will be interesting to see how much the Steelers attack the Giants through the air in this matchup. I could very easily see a shootout here similar to what we saw in the Cowboys game.

Going back to the well with the RotoViz Game Splits app, we can see just how effective Big Ben has been at home since the start of 2014. Take a look at his eye popping numbers in the “In Split” column: 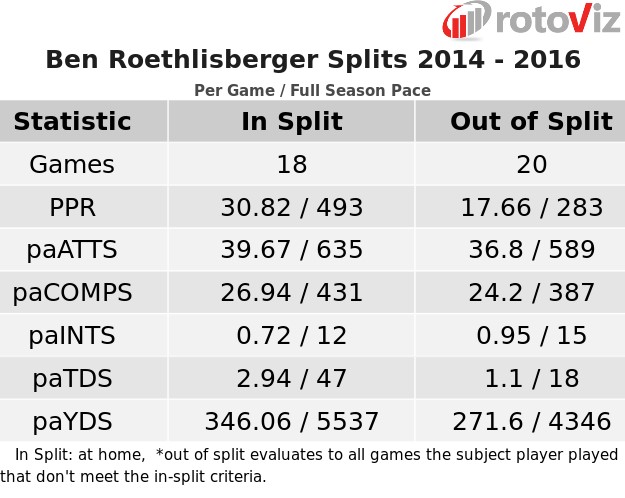 Regardless of the strong numbers against quarterbacks that New York has posted, Ben should be able to move the ball effectively against this team. He is averaging 346 yards per game and nearly three touchdowns per game since 2014. Fire up Big Ben in this one.

Antonio Brown was spectacular on Thanksgiving, posting three touchdowns against the hapless Colts secondary. This week AB, will face a tougher challenge against Janoris Jenkins, Landon Collins and the rest of the talented Giants secondary. The Giants have allowed 34.9 PPR fantasy points per game to opposing wide receivers which is 9th best in the NFL. No secondary is a match for the red hot Antonio Brown right now. AB is averaging nearly one touchdown per game at home since 2014. I expect a huge performance from AB as he goes up against Odell Beckham Jr. for the first time in their careers.

The rest of the Steelers receiving corps has been lifeless for the most part. The Steelers desperately need Sammie Coates to step up and provide the deep passing threat that we have seen him be at points this season. Coates has been stuck on 20 receptions since Week 7! Eli Rogers has also been far too quiet over the past several weeks. If the Steelers can start to get some production from these two young receivers, the passing game will flourish in December.

Ladarius Green made several impressive catches last week against Indianapolis. Mike Tomlin indicated that Green is finally ready to see a bigger workload. Green is not being asked to block much in the passing game and played on a season-high 14 snaps and delivered big plays with 20.7 air yards per target.

One of the weak spots in the Giants defense is their ability to defend tight ends. New York ranks 18th in PPR fantasy points given up to opposing tight ends, allowing 12.9 points per game. Green should be very involved in the Steelers game plan this week and I like him as a strong fantasy option this week.

Le’Veon Bell is an unstoppable weapon on the ground and through the air. This week, Bell has a fantastic matchup against a Giants defense that is 24th in fantasy points allowed to opposing running backs, giving up 25.2 PPR fantasy points per game.

Bell may be the best fantasy option on the Steelers this week as he has the ability to post a monster stat line in a back and forth contest. I could see a game flow for the Steelers where they try to pound Bell all day and keep the ball away from Eli Manning and the Giants offense. Bell and David Johnson are the clear top fantasy options on the board this week. Bell is worth paying up for on DraftKings and FanDuel.

The Steelers have an excellent opportunity to start December with a bang if they can beat the Giants at home. This win would be a huge confidence boost for a team that has struggled to beat the top tier teams on their schedule.

This game is very likely to be high scoring as seen by the 49 point over/under at the Las Vegas sportsbooks. The Steelers enter the game as a 6 point favorite but I think it will be a little closer than that. The Steelers should win this game if they can win the turnover battle. Enjoy this one!