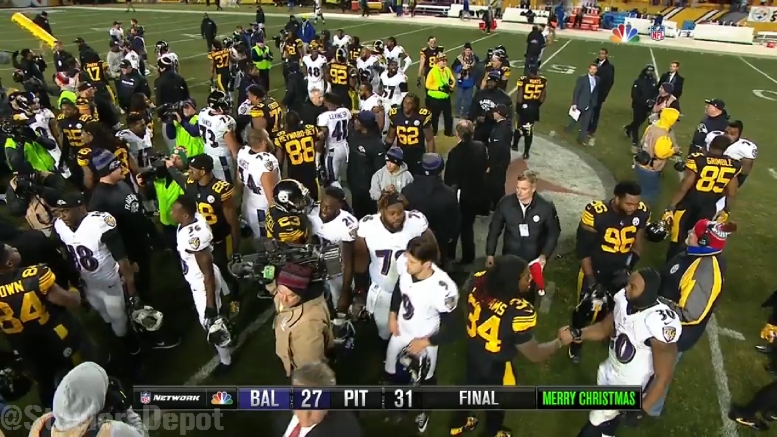 You may have heard this recently—although you may have heard the exact opposite as well, depending on who you listen to—but the Pittsburgh Steelers are pretty good. That is an easy thing to say as they ride a six-game winning streak to a division-clinching game that sends them to the postseason for the third consecutive season.

But the Steelers are one of the great franchises in NFL history, without question, and have the numbers to prove it. Since the NFL-AFL merger in 1970, no other franchise in the league can compare to what they have done over the course of the past 46-plus seasons.

With their win Sunday over the Ravens, the Steelers assured themselves of reaching the postseason for the 29th time since the merger, as they have managed to do 61.7 percent of the time. The victory kept them ahead of the Cowboys, who this season secured themselves their 28th playoff berth over the past 47 seasons. The Vikings, with 26, are the only other team to have at least 25.

Over the course of the past 10 seasons, the Steelers have also won the AFC North title five times—exactly half the time—under Head Coach Mike Tomlin, who recently became the 40th coach in NFL history to win 100 regular-season games. The Steelers, by the way, have had three consecutive coaches win at least 100 games. They are the only franchise in NFL history, post-merger or otherwise, that can claim to have had three coaches win 100 games.

But between 1970 and 2006, the year prior to Tomlin’s arrival, the Steelers also claimed another 17 division titles. Just that 17 would tie them for the fifth-most division titles claimed by any NFL team since the merger, but their 22 division titles in total since 1970 give them a comfortable lead as the only team with at least 20.

Most Division Titles Since 1970 Merger:

Pittsburgh is one of seven teams to have won the division title at least 15 times, with the Cowboys and 49ers, predictably, tied for second with 19. The Patriots, thanks to their recent string of success in the past 15 years, have won 18 division titles, with Minnesota has won 17, and the Broncos and Colts have each won 15.

There is, of course, also the fact that their six Super Bowl are more than anybody else can claim. Their eight total trips to the Super Bowl are also tied for the most along with the Cowboys, Patriots, and Broncos.

Pittsburgh’s 34 postseason victories are the most in NFL history, tied with the Cowboys, although Dallas has appeared in the most playoff games, at 60. With yet another trip to the postseason—the seventh over the span of the past 10 seasons, and the ninth in Ben Roethlisberger’s 13 seasons—they will be looking to do so more damage.