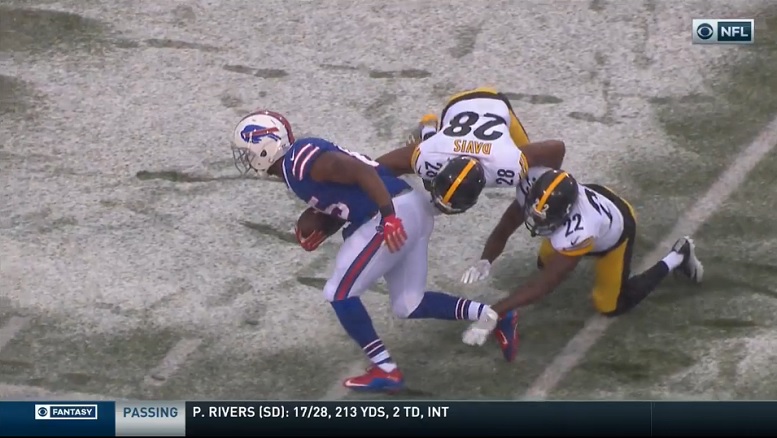 The Pittsburgh Steelers win over the Buffalo Bills this past Sunday featured quite a bit of solid play by the defense. While the unit did hold the Bills top-rated rushing offense to just 67 yards on the ground during the contest, Buffalo quarterback Tyrod Taylor was able to throw for 228 yards and two touchdowns with a good portion of that coming in the fourth quarter.

During his weekly talk with Missi Matthews on Steelers Nation Radio, defensive coordinator Keith Butler pointed out a few areas where his defense failed Sunday against the Bills and leading the list was poor tackling.

“We gave up some stuff at the end that we shouldn’t have given up,” Butler said. “We went into the game talking about having our tackling be as good as we could with our tackling and we missed 17 tackles. It hurt us at the end of the game and we gave up some stuff we shouldn’t have given up. Nobody wants to give up 20 points, or anything like that. We ended up doing that. That was disappointing to us at the time.”

Butler went on to describe two different plays that his defense gave up to the Bills offense that shouldn’t have happened with the first one being the 22-yard run by Bills running back Mike Gillislee right before the end of the first half.

“The 20-yard run was just a mistake in fits, right there before the end of the half,” Butler said “That was something we shouldn’t have given up. We were in a decent defense. We weren’t in the right gap that we should have been in and that hurt us a little bit but they didn’t score anything off of it at that point and time.”

You can see a replay of that run below and it looks like linebacker Ryan Shazier was the guilty one on this particular play. Thankfully, that play didn’t wind up producing any points for the Bills.

“We missed the interception. The guy caught the ball and then we have two guys on him and we knock each other off of him and he walks in for a touchdown,” Butler said “We’ve got to do better than that. We’ve got to make those plays when we have the opportunity to do it.”

As you can see below, Steelers rookie cornerback Artie Burns went for the interception and missed it. After that, safety Sean Davis and cornerback William Gay both collided as they attempted to tackle Clay after the catch and the missed attempts resulted in an easy touchdown.

While Butler was unhappy about his defense’s tackling and those two aforementioned plays, he was happy with one specific thing his unit did against the Bills.

“The good thing that they did was swarming to the ball and that saved us a little bit on some occasions when we missed tackles,” Butler said.

Moving forward, Butler said he hopes his defense will improve in not only tackling, but how they go about closing out games.