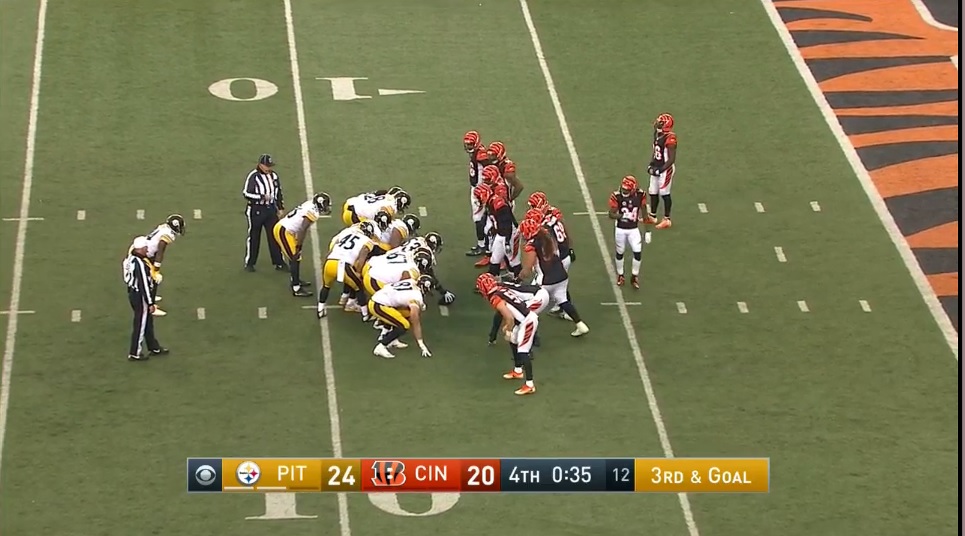 Before we completely move along to the Pittsburgh Steelers’ next game—as big as it might be, just with pretty much the season coming down to it—there is still a lot that we have left to cover from the team’s big win on Sunday over the Bengals, which helped set up this mini-season showdown on Christmas Day.

I think that really one of the most overlooked aspect of the Steelers’ win came down to the final six minutes of the game, which was when the offense put on an exceptional display in holding on to the ball, driving all the way down the field and never giving the Bengals’ offense an opportunity to retake the lead once Pittsburgh was able to get on top after a game-long uphill battle.

The offense was able to possess the football for 32 minutes and 32 seconds. The difference came at the end of the game, when the Steelers got the ball back after the defense forced Cincinnati to punt following a four-play drive. From the 5:53 minute mark to the final second of the game, the ball was in the hands of quarterback Ben Roethlisberger, running back Le’Veon Bell, and the rest of that group.

The drive opened with a quick pass over the middle to Bell to get things started for eight yards. The running back picked up the first down on the ground the following play.

Then they got into some trouble and were put into a third-and-long situation, but Ladarius Green bailed them out with a big catch down the seam in between zone coverages for 28 yards. That play occurred at the 3:37 mark, and had it been incomplete, they would have been punting with about three and a half minutes left on the clock to give the Bengals a chance to drive down the field and score a touchdown.

A quick slant hit-and-run to Eli Rogers went for nine yards following that play to keep the offense in front of the chains, and Bell again punched home another first down on the ground, prompting Cincinnati to call their first timeout.

On the following play, Roethlisberger threw a screen pass to Bell up the left sideline, where he smartly slid to stay inbounds after a nine-yard gain, which resulted in the Bengals using their second timeout just before the two-minute warning. The back for the third time on that drive converted on short-yardage for yet another first down on the following play.

Bell got the ball again after the two-minute warning, but was hit for a loss of one on the play, with the Bengals using their final timeout with 1:51 to play. Knowing that they were behind the chains and would not be able to close out the game, Roethlisberger got aggressive, looking for Antonio Brown in the end zone.

The throw didn’t hit, but it did draw a pass interference call in the end zone that gave the Steelers a first down at the one-yard line with 104 seconds remaining, allowing them to close out the game in victory formation. Considering the long uphill battle the game proved to be, I think it would be fitting to acknowledge how big that final drive was.