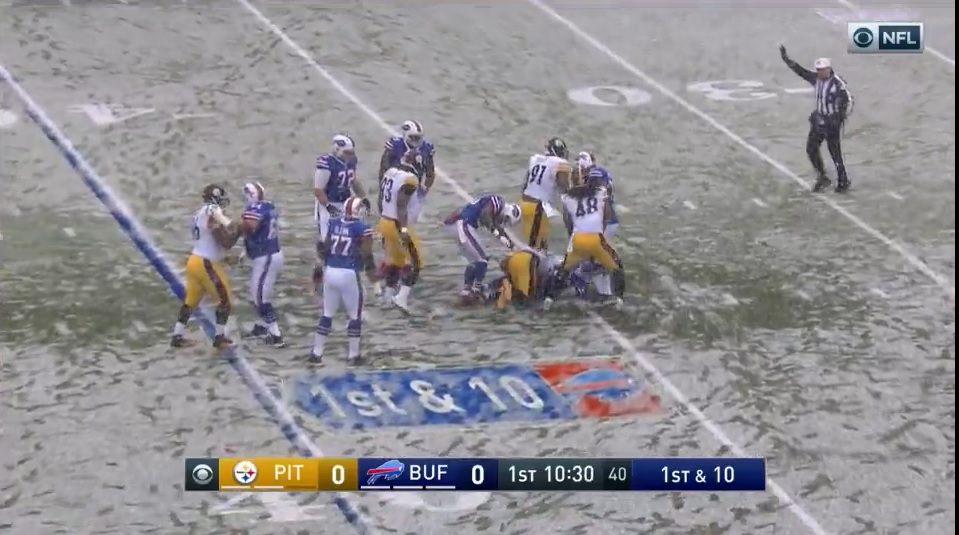 This is the game stats obsessed people like me dream of. These are my Olympics.

Bell’s 236 yards rushing are the most in a game in Pittsburgh Steelers’ history, surpassing Willie Parker’s old mark of 223.

Bell is one of two Steelers to ever rush for 200+ yards and three touchdowns, joining John Henry Johnson’s 200 yard, three touchdown performance in 1964 against the Cleveland Browns.

It’s only the second time that 200/3 mark has been hit since 2013. The New England Patriots’ Jonas Gray did it two years ago.

His 298 yards from scrimmage is the second most in Steelers’ history, only trailing Antonio Brown’s 306.

The rushing yards are the 15th most in NFL history while the yards from scrimmage is tied for 10th all time. The latter more than Jim Brown ever had in a single game.

For a running back, the scrimmage yards are tied for fourth most ever. Only Billy Cannon, Adrian Peterson, and Priest Holmes have had more. Bell tied with, of all people, Jerome Harrison.

– Bell’s 42 touches are the second most in his football career, college or pro. The only one surpassing him is the 50 burger he had his last year at Michigan State.

And those touches are the most in Steelers’ history, surpassing the 41 Franco Harris did twice. Once in 1976, once in 1979.

The 38 attempts are the most by anyone in the NFL since Jerome Harrison’s 39 seven years ago. And second most in Steelers’ lore, only beaten by Harris’ 41 in 1976.

– I’m sorta stretching the parameters of the stats here, sue me, but the Steelers are the first team to run for at least 235 yards, throw three interceptions without a touchdown, and win since the 1986 Chicago Bears, who beat the Philadelphia Eagles 13-10 in overtime.

– Eight of Cobi Hamilton’s 12 catches this year have been on third down. Six of those eight have moved the sticks, including the lone grab of his today.

– Sean Davis had 1.5 sacks today, the first of his rookie career. He never had 1.5 in any season at Maryland and finished with 2.5 in his career.

The college opponents? Samford and UT-Martin. So the Bills are a slight step up in competition.

– Pittsburgh had 14 rushing first downs today for the second time since 2007. The other came in 2014 in a win over the Houston Texans, finishing that one with 15.

It’s only something they did three times from 2000-2006 so don’t think the power attacks of yesteryear did this on a weekly basis, either.

– Keys to win? Protect your quarterback, attack theirs.

In the last two seasons, the Steelers have sacked the opposition 5+ times while not being sacked themselves a whopping five times (twice this year).