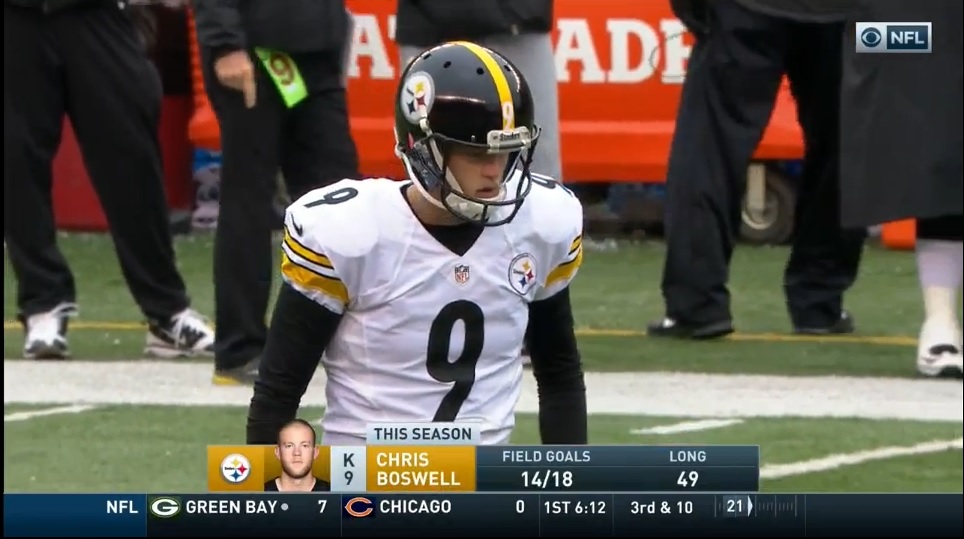 Welp, this was a weird one.

– The box score at a glance is innocent enough. But the way the Pittsburgh Steelers arrived at their 24 points sure is unique. Six field goals, a touchdown, and a failed two-point conversion.

They are, according to the trusty Pro Football Reference, the first team in NFL history to score exactly 24 points with at least six made field goals in a game.

– The hero of the day, Chris Boswell, has tied the Steelers’ franchise record with six made field goals in a game. He’s the first Steeler ever to have five field goals connect from 40+ yards.

He’s the first in the NFL to do it since Mason Crosby last season. Frankly, that’s sooner than what I would’ve guessed.

– The Steelers have now won their last three, and four of the last five, in which they allow at least 20 points at halftime. Beat the Detroit Lions in 2013, the Indianapolis Colts in 2014, the Denver Broncos in 2015, and the Cincinnati Bengals in 2016.

– The 20 points the Bengals scored was the first time Pittsburgh gave up that many in the first half to them since 2005. The Bengals would win that game but the Steelers would win the Super Bowl that year. Hmm…

– Cobi Hamilton has now caught nine of his 13 passes on third down this season. Seven of them have moved the sticks, including today’s lone 21 yard snag.

– In six career meeting against the Steelers, Tyler Eifert has gone over 60 yards only once. Today was his worst game ever. One grab for nine yards.

– James Harrison is credited with nine total tackles today. Looks like the first time he’s done that since December 30th, 2012.

– Sammie Coates 44 yard kick return is the longest one the Steelers have had since Emmanuel Sanders had the same yardage in a game against the Baltimore Ravens in October of 2013.

– The Steelers have won five in a row for the first time since 2009 and for only the third time under Mike Tomlin. Bill Cowher did it eight times. Chuck Noll six.

– Despite barely touching the ball in the first quarter, the Steelers ended the game dominating time of possession. They led it 32:32 to 27:28.