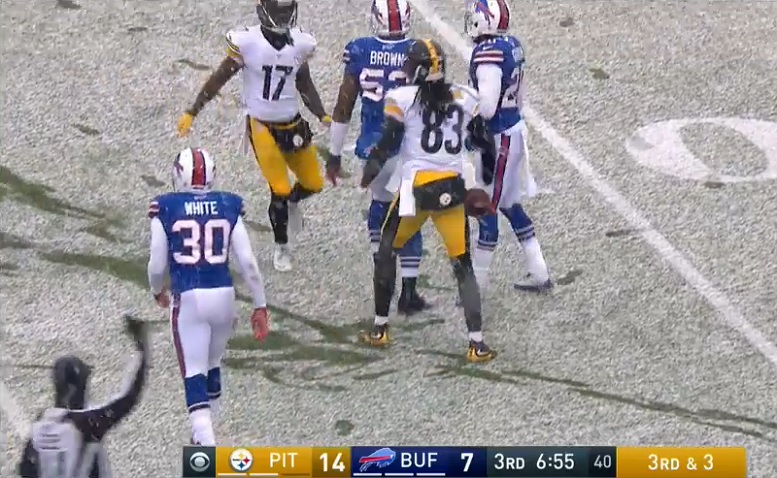 Since being promoted from the Pittsburgh Steelers practice squad in October, wide receiver Cobi Hamilton has recorded all of 12 receptions for 153 yards and a touchdown. When you consider that he’s played 261 total offensive snaps during a span of 8 games, his stats say he’s not contributing much to the offense.

In Sunday’s win over the Buffalo Bills, Hamilton’s latest third down reception came on a 3rd and 3 play from the Bills 28-yard-line with 7:05 left in the third quarter. On that play, Hamilton didn’t appear to be the primary option for quarterback Ben Roethlisberger but after working himself open in the middle of the field underneath a cover-3 look, the wide receiver became an easy target.

How significant was that catch by Hamilton? We’ll, the Steelers offense scored just two plays after that 15-yard gain.

With fellow Steelers wide receiver Darrius Heyward-Bey currently sidelined with a foot injury, you could argue that Hamilton is the team’s best blocker out wide. Against the Bills, he delivered several key blocks that won’t show up in the gamebook.

Moving forward into the Steelers final three regular season games, there’s no reason to think that Hamilton will see a significant reduction in playing time even if Heyward-Bey can finally overcome his foot injury. Even if that does happen, there’s a good chance Hamilton will still see the field on third downs.