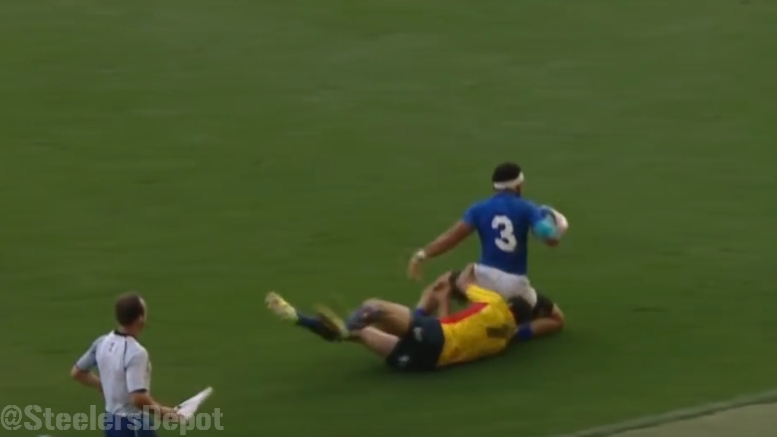 Back in the middle of October, the Pittsburgh Steelers were a veritable cauldron of brotherly love. They were heading down to Miami where Maurkice Pouncey would be able to play against his identical twin brother, Mike Pouncey, for the first time in their professional careers. They had just signed Karlos Williams to the practice squad, the younger brother of veteran Steelers linebacker Vince Williams. And they gave Alejandro Villanueva’s little brother, Inaki Villanueva, a tryout.

Of course, things more or less went disastrously from there. Karlos Williams eventually received a 10-game suspension, his second suspension of the season. Mike Pouncey eventually ended the year on injured reserve. And Inaki Villanueva went unsigned. But he is back now, recently having a second workout with the Steelers.

You can certainly bet that the success that the Steelers have found with Alejandro has them enticed by his younger brother, Inaki, who is an Olympic-class rugby player for Spain. The two, and their other brothers, shared an intriguing upbringing, living in different parts of the world, but Alejandro ended up in the Army, while Inaki stayed in Spain.

The Steelers first caught wind of Alejandro Villanueva simply after Mike Tomlin saw him on the opposing sideline when Pittsburgh played the Eagles in the preseason in 2014. He was a defensive end on their 90-man roster at the time, and the Steelers then signed him to convert him to tackle on their practice squad.

Over the course of that practice squad year, Mike Munchak and the offensive coaching staff were able to build out of Villanueva’s natural gifts—including not just pure size, but also athleticism and intelligence—what I now feel comfortable calling a legitimate starting left tackle for a championship-caliber team.

Inaki Villanueva is not altogether different. In fact, he was also first noticed just from hanging around the practice facility. Both are naturally gifted in terms of size, athleticism, and intelligence. Inaki is still just 25, so it’s not as though he is approaching the end of his window to be able physically to play in the NFL.

I think that he would make a very intriguing futures signing for the offseason, and, given that the Steelers have brought him back for another workout, it wouldn’t surprise me if that ends up happening. Alejandro told Steel City Insider reporter Jim Wexell back in October that Inaki still had some weight to put back on—which he said he was as capable of doing as he was—because he was at the time playing a very taxing form of rugby.

That may be a suitable explanation for why the Steelers wanted him to come in a second time, about two and a half months later, to give him a look over at a heavier playing weight. He is being brought in as a tight end prospect, so he’ll need some meat on his bones.

Saying that he could get up to 250-260 pounds, Alejandro said of his younger brother, “he’s not in explosive football shape right now but just like I did he can bulk up a hundred pounds if need be”. Now, if the Steelers end up signing Inaki Villanueva, he would not just be a long-view prospect, as his brother was, he would also be a longshot. But it certainly wouldn’t hurt to have another Villanueva, with their pedigree as people, in the locker room for a summer.