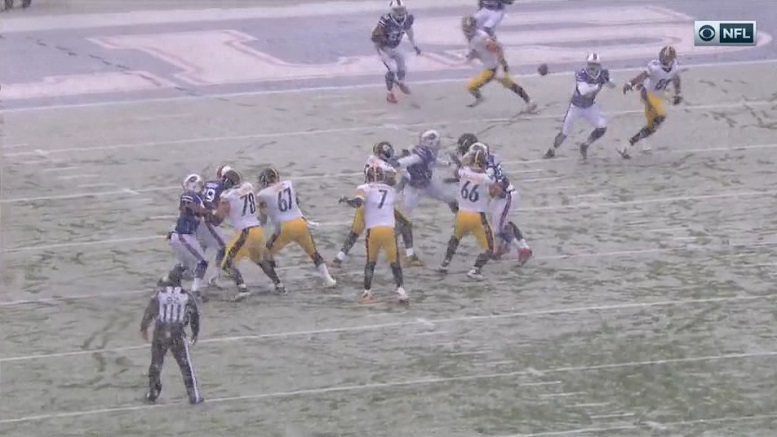 Pittsburgh Steelers quarterback Ben Roethlisberger had an off-day Sunday against the Buffalo Bills and it included him being intercepted three times during the contest. After the game was over, Roethlisberger addressed all three of his interceptions.

“The first interception, that’s just Ladarius [Green] and I working a little more,” Roethlisberger explained. “I thought he was going to break under, he kind of stopped.”

It looks like this was an option route gone bad and mostly on the part of tight end Ladarius Green. With the linebacker outside, Roethlisberger probably expected Green to break inside to the middle of the field. In other words, right where he threw the football. Bills linebacker Lorenzo Alexander got an early Christmas present on this one.

So, what about the second interception on a pass intended for wide receiver Antonio Brown?

“The second one I just should have called timeout,” Roethlisberger said. “We didn’t have the personnel on the field, we tried to rush it and I threw it a little early before AB could slide out of it. That’s on me.”

There was indeed some confusion pre-snap as Steelers wide receiver Cobi Hamilton was late coming onto the field. Besides that, Roethlisberger obviously expected Brown to break outside after he gained some separation from Bills cornerback Stephon Gilmore at the top of his route. More than anything, it looks like a forced throw by Roethlisberger.

Roethlisberger’s third interception came with the Steelers well inside the Bills red zone. This time, Roethlisberger was picked by linebacker Zach Brown on a pass intended for tight end Jesse James in the end zone following a nice play-action fake. That fake, however, didn’t fool the Bills linebacker.

“On the third one, I throw that ball the same way 10 out of 10 times. That linebacker made one heck of a play. That was just truly spectacular,” Roethlisberger said.

A little more air under that pass and it’s likely a very easy touchdown for the 6-7 James.

On top of those three interceptions, Roethlisberger had at least two more passes during Sunday’s win that very easily could have been picked. When the all-22 tape is released it will be interesting to see what led to the quarterback’s bad decisions on those plays.