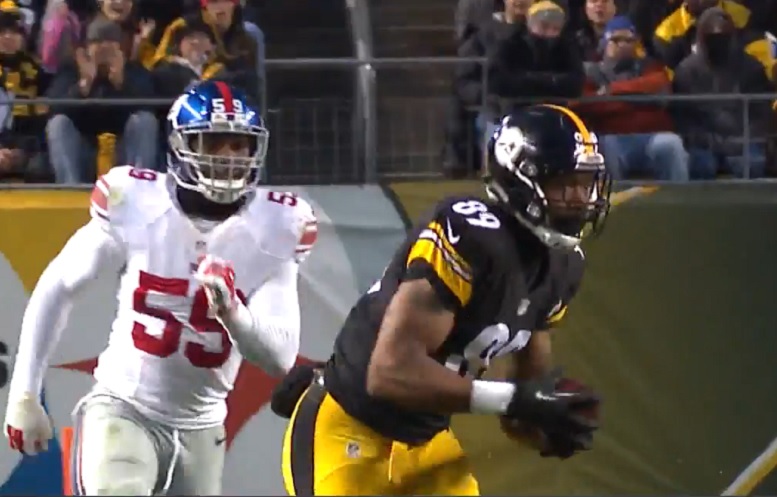 Pittsburgh Steelers tight end Ladarius Green had a career day in the team’s Sunday win over the New York Giants and it included him catching 6 passes for 110 yards and a touchdown. One of those six catches came on a 3rd and 7 play late in the first quarter and it resulted in a gain of 37 yards. That play really impressed quarterback Ben Roethlisberger.

“That’s a play where he’s a fourth option on that play and it kind of turned into an ad lib scramble play,” Roethlisberger said Tuesday morning during his weekly interview on 93.7 The Fan. “I rolled out to the right and he kind of turned up our sideline and I just gave a quick point to takeoff and he didn’t think twice.

“I didn’t need to point twice, I didn’t need to hold it. He instantly knew exactly what I was thinking and gesturing which is awesome because we haven’t had a lot of game time together and even practice time. So, you would have thought that we’ve been playing together for years on that particular play and he turns up, I throw him the ball and he makes the rest happen.”

While Roethlisberger certainly gets some of the credit for that play due to his ability to extend it, the quarterback knows he wouldn’t have been able to get a chunk of yards had Green not been on the same page as him.

“For me, that’s just so encouraging of a guy that gets it. He understands football,” Roethlisberger said of Green. “I’ve said for many years when people have asked me about the improv and the ad lib, the backyard-type football, you either have or you don’t.

“Guys like Heath Miller had it. A.B. [Antonio Brown] has it. We’ve had guys that just get it. Guys that when you’re going out and you’re playing in the backyard, they’re your first pick. Well, right now to me it looks to me like Ladarius has it and that’s very encouraging.”

Since being activated to the Steelers 53-man roster from the Reserve/PUP list several weeks ago, Green has caught 11 total passes for 207 yards and a score. Additionally, he’s been wide open on several of those completed passes and after Sunday’s game he was asked if that surprises him.

“Yes. And at the same time, Ben has been throwing me open, Green said, according to Ray Fittipaldo of the Pittsburgh Post-Gazette. “He’s put the ball where nobody can be around it except for me. So like I said earlier, he makes it easier for me, as well as A.B. and Le’Veon (Bell). They draw so much attention that it makes it easier for everybody else.”

Even though his role in the Steelers offense continues to grow on a weekly basis, Green knows that he has plenty of room for improvement in the team’s final four regular season games.

“I still have a long way to go. I’m nowhere near where I want to be,” Green said. “I left a lot of plays on the field. But luckily, the defense, they helped me and us out a lot. They made a lot of key plays when I messed up, when I dropped a pass, something like that. I still have a lot to build on.”

By the way, the big aforementioned catch Green had Sunday against the Giants came just one play after he suffered a drop. In other words, he and Roethlisberger both had short memories and it resulted in an explosive play on the very next snap. By the looks of things, we can probably expect a few more explosive plays from that duo moving forward into the final quarter of the regular season.