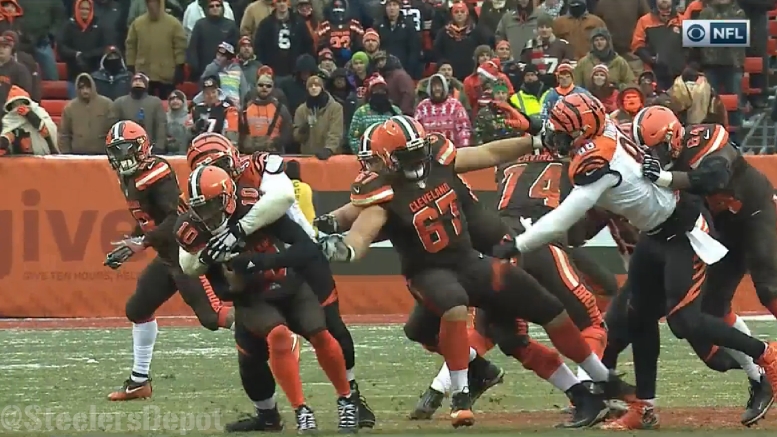 The Cleveland Browns got their starting quarterback, Robert Griffin III, back on the field on Sunday for the first time since the season opener. Based on the results, maybe they would have rather had him stay on injured reserve, because he certainly didn’t look like a starting quarterback.

After all, it’s hard to have much to say in the way of compliments when the most noteworthy play of your day was an interception thrown into triple coverage off of a flea-flicker taken from your own end zone, which kind of sums up the 2016 season for the Browns in a way.

To his credit, he did manage to get into the end zone once, as he ran the ball in for a score on a quarterback sneak from the one-yard line, accounting for Cleveland’s lone touchdown in their 23-10 loss to their Ohio rivals, the Bengals. It was his first and so far only score of the season.

During the loss to Cincinnati, the former first-round draft pick completed just 12 of 28 passes, posting a completion percentage of 42.9, and he gained 104 yards on those 28 pass attempts, which translates to 3.7 yards per pass attempt. He was also sacked three times for a loss of 19 yards, meaning that the Browns gained an average of 2.7 yards per passing play.

Griffin posted a very similar stat line during his performance in the Browns’ season opener as well. In that game, which he played from beginning to end, he completed 12 of 26 passes for 190 yards with an interception and three sacks taken. On the year, he has competed 24 of 54 pass attempts for 294 yards, averaging 5.4 yards per pass attempt, with zero touchdowns and two interceptions, including six sacks, a fumble that he did not lose, and the rushing touchdown.

The former Washington quarterback’s second game under center since the 2014 season was bad enough to top Pro Football Focus’ list of the 10 worst performances of Sunday’s games, which one might be hard-pressed to argue was not justified.

“Cleveland were robbed of their preferred QB lineup this year when RG III went down injured in the first week of the season”, reads the blurb on Griffin. “He had been playing badly that game, but it was against a formidable Eagles defense. This week marked his return, and he was once again horrendous, suggesting that maybe the Browns weren’t missing much by his absence all year, anyway”.

For most of the season, Cleveland has been relying upon the services of rookie quarterback Cody Kessler, who has made nine starts, if I’m not mistaken, but he has been knocked out of several of those games, twice due to concussions.

Head Coach Hue Jackson said prior to the game that Griffin would be the starter and that this was his audition to prove that he is a long-term answer for the Browns. He also said that it would be okay if things didn’t go so great, which, based on Sunday, appears to be exactly how the season will end.