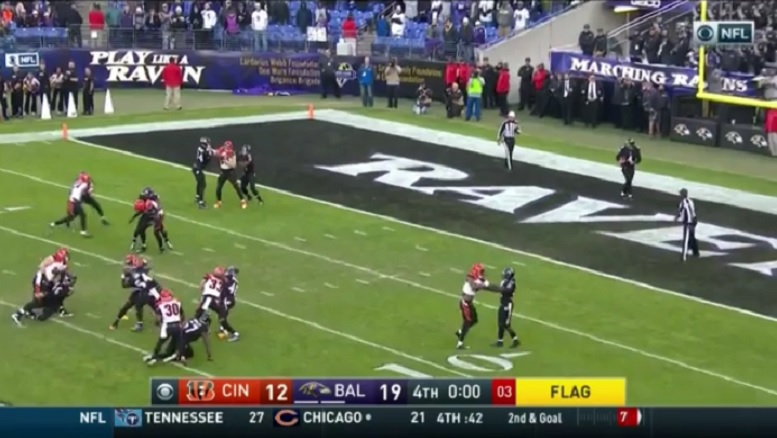 Earlier this week, we brought to you an idea floated by Baltimore Ravens Head Coach John Harbaugh about a rule change that would award the kicking team a point if the ball on the kickoff went through the uprights. Harbaugh happens to have arguably the best big-leg kicker in the game, and that kicker, Justin Tucker, shockingly agreed with his head coach about the proposal.

But it sounds as though the NFL’s Competition Committee may be looking at a different proposal relating to the Ravens, and perhaps one that they will not like. You may recall that the Ravens ended their Sunday victory over the Bengals by drawing no less than nine holding penalties on a 12-second punt play in order to drain the clock without actually exposing themselves to transferring possession.

Many argued that this play constituted a palpably unfair act, which would allow the officials to use their discretion in order to determine the appropriate level of discipline for the act. The intention on Baltimore’s play was obvious, so the discipline would likely reward the Bengals the ball with time on the clock, or something to that effect.

According to NFL Vice President of Officiating Dean Blandino, the league is aware of this, and it is something that they are going to examine during the offseason. He spoke on NFL Network, saying that what the Ravens did “is kind of a loophole”. And they tend to try to close loopholes in their rules.

“All the Ravens players pick a Bengals player out and just hold him”, he said, describing the nature of the play. “The idea is, ‘we just want to bleed the clock’”. He added, “I think you’ll see the competition committee review this”.

You may recall that it was only a couple of years ago that the Ravens were the beneficiary of a rule change that stemmed from a play run against them by the Patriots that at the time was considered legal, pertaining to how and when the offense was able to declare a player an eligible receiver in order to avoid confusion—the confusion being intentional.

The Ravens were upset about the play that the Patriots ran against them, in spite of the fact that it was within the rules as they were written, even if it was clearly pushing the boundaries of the spirit of the rule.

Now they are likely to be on the other side of the coin, finding themselves as the ones pushing the boundaries of the rule, and in doing so exposing one of the ‘loopholes’ that need closing. But, of course, the Ravens were able to get away with running that play when they needed to run it.

The odds of them facing that exact same set of circumstances that would result in them needing to run that play again—or at least to face that situation more than one or twice in the near future—is likely pretty slim. But it wouldn’t surprise me if Harbaugh were to get upset if it were addressed in the rule evaluations over the spring and summer.