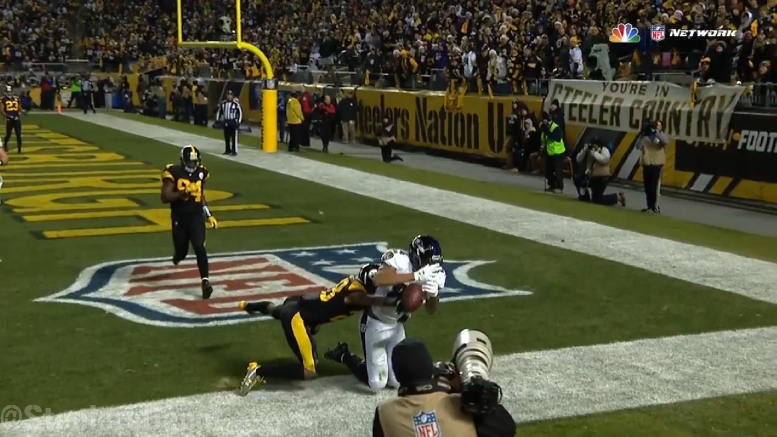 In a game that featured a litany of peaks and valleys, it was difficult at any point of Sunday’s game between the Pittsburgh Steelers and the Baltimore Ravens to get a true read on how things would ultimately play out. Ironically, not even one of the best measures—red-zone efficiency—was able to make the true call. But even though they spoiled it late, the Steelers’ defense deserves credit for its work against the Ravens in the red zone.

Truth be told, the Ravens this season have been no better than average as a red-zone scoring offense. On the season to date, they rank 18th in red-zone efficiency, scoring a touchdown at a rate of just under 55 percent. Surprisingly, Baltimore is actually slightly better on the road than at home—and I do mean slightly, with the difference being .45 percentage points. The purpose of pointing that out, however, is to neutralize the road factor.

Against the Steelers, the Ravens entered the Steelers’ 20-yard line throughout the evening, no fewer than five times—nearly six times, as they reached the 22-yard line once as well, and settled for a field goal. But they only came away with a touchdown on two of those five trips.

The first time they got into the red zone, it proved to be a disaster, and they actually came away with no points. Following an unnecessary roughness penalty that put them on the 16, a run stop for a loss of one preceded a sack by Lawrence Timmons for a 10-yard loss. After an incompletion, the holder botched the hold on a high snap that resulted in an aborted field-goal attempt.

Just at the end of the first half, Baltimore breached the red zone a second time, getting as far as the 19-yard line before they threw two incomplete passes, settling for a field goal. Of course, their first drive of the second half began on Pittsburgh’s 20-yard line following an interception, and that quickly turned into eight points following an 18-yard touchdown and a two-point conversion.

The third quarter ended with yet another interception early on a Steelers drive, this time spotting the Ravens on Pittsburgh’s 11, but mercifully, the defense held. Following a two-yard run and a short pass for five yards, Joe Flacco looked for his tight end in the end zone breaking toward the sideline, but Sean Davis did a stupendous job in trailing, ripping the ball out late, and forcing them to settle for a field goal.

Of course, it was the Ravens’ final trip inside the red zone that was very nearly the back breaker not just for the game, but for the season. After driving down from the 25-yard line, they ultimately faced a third and one from the 10 when the fullback got the carry and broke a tackle, escaping for the go-ahead score with 78 seconds to play.

It was rather fortunate that the offense was able to bail them out in the next 69 seconds, with the Steelers scoring their own third touchdown in four trips inside the red zone. But despite breaking at the worst possible time, it must be said that their red-zone defense helped keep them in the game when things were rough.