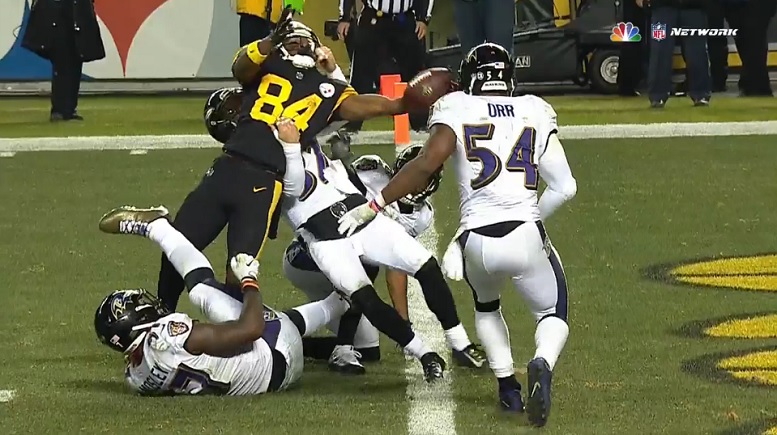 Baltimore Ravens safety Eric Weddle did his best to keep Pittsburgh Steelers wide receiver Antonio Brown out of the end zone late in Sunday’s night game at Heinz Field and that included him even grabbing a good handful of facemask. While Brown ultimately scored on the play due to his tremendous effort, Weddle wasn’t flagged for grabbing a hold of the wide receiver’s facemask. In fact, while the referees on the field missed the infraction, it appears so too did the league office.

According to Mike Florio of Pro Football Talk, Weddle was not fined this past week for face-masking Brown on that play and that really is quite confusing. Brown, by the way, can’t seem to draw a facemask penalty to save his life as the referees also missed Cincinnati Bengals safety Shawn Williams tugging on the wide receiver’s face protection during a pass breakup in the end zone in Week 16. Williams wasn’t fined the following week, either. The league, however, made sure to penalize and fine Steelers defensive end Stephon Tuitt for face-masking Bengals quarterback Andy Dalton in that game.

“While the NFL will disclose fine information in response to requests regarding specific players (giving the Friday exercise the feel of a quiz show), the league never explains the decision,” Florio wrote Saturday morning. “Maybe that’s because the explanation would be a grunt to the cadence of, “I don’t know.””

The league talks quite a bit about player safety these days and while missed calls during a game are sure to happen, it hasn’t stopped them from fining players for missed infractions after the fact.

It certainly appears as though Brown is free-game when it comes to getting his head and neck twisted. At least that won’t likely happen to him this Sunday at Heinz Field as he’s expected to be held out of the Steelers regular season finale against the Cleveland Browns to preserve him for the playoffs and potentially more uncalled and unfined facemask penalties.