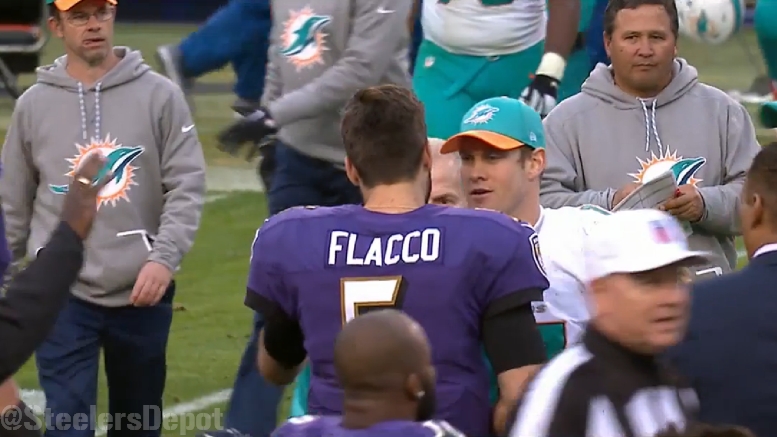 The Baltimore Ravens had a tough task ahead of them, at least on paper, in hosting the Dolphins, who were riding a six-game win streak, but also a great opportunity to put a game in hand over their AFC North rivals, the Pittsburgh Steelers who had to contend with the 8-3 Giants.

The Ravens’ game was the first on the table with the 1 PM kickoff, so it was important for them to hold serve with a victory, and they did that with gusto, trouncing the Dolphins with a very commanding victory and showing the team as they had not looked all season.

Ravens quarterback Joe Flacco had easily his best game of the season, completing 36 of 47 passes for 381 yards and four touchdown passes versus a lone interception. They did not run much, but they also ran well, gaining 113 yards on the ground on just 17 carries, excluding a trio of kneel downs by a backup quarterback at the end of the game.

The quarterback, in fact, hit no less than 10 different targets over the course of the game, and, frankly, it’s hard to find more than 10 targets in a game just based on roster numbers and configurations. But the star of the day, and sort of a feel-good story, was tight end Dennis Pitta, who has come back to have a good year after essentially being out of football due to career-threatening hip issues for a couple years.

Pitta caught nine passes from Flacco for 90 yards, two of which he put into the end zone. Those were the first two touchdowns of his season, and first since 2013. He now has 61 receptions on the season for 529 yards. That already ties a career-high in receptions, and his the second-highest yardage output, 140 yards behind his 2012 season, when the Ravens won the Super Bowl.

The Ravens were firing on virtually all cylinders, with the defense picking up a pair of sacks to go along with three interceptions, all of which came in the secondary. They held the Dolphins to just 62 rushing yards and 226 passing yards, fewer than 300 total yards for the game.

But Baltimore doesn’t have a lot of time to celebrate as they prepare for one of the two most critical games remaining on their schedule. Their next game comes away from the confines of their home stadium, where they have struggled more. It is in Foxboro, against the Patriots, who still have plenty to play for, by the way, and who always relish the opportunity to knock off the pesky Ravens.