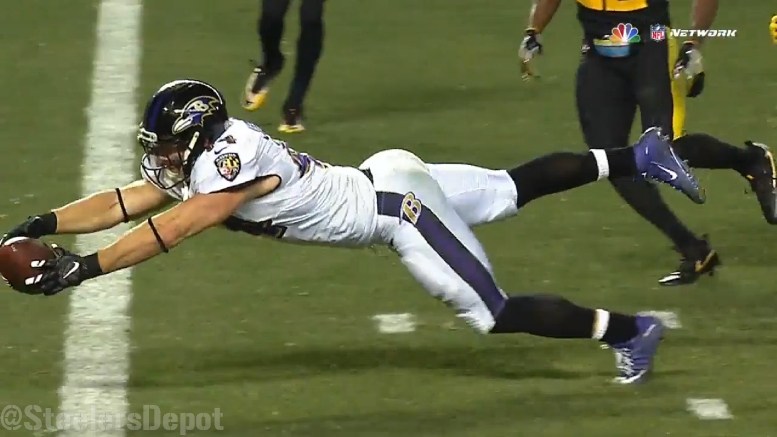 Over the course of the past two days, there has been a lot of discussion, understandably, about the final minutes of the Christmas Day game between the Pittsburgh Steelers and the Baltimore Ravens. The Ravens likely thought that they had clinched the game with a go-ahead score that left just 78 seconds on the clock before the Steelers managed to come back with a game-winning touchdown with nine seconds to play.

There has been a lot of debate going on since then—especially in Baltimore—about that 78 seconds, and whether or not Ravens fullback Kyle Juszczyk should have gone down rather than scoring on the third-down and one play from the 10-yard line.

For context, the score at that point in the game was 24-20, so the Ravens were trailing by more than a field goal. They had to score a touchdown on that drive not just to take the lead, but even if they wanted to try to tie the game. A field goal would have been less than useless to Baltimore at that point.

Touchdowns, as much as it may not seem like it at times, are still a hard commodity to come by in the game of football, and at that point in the game, Baltimore had scored just one touchdown in four trips inside the Steelers’ red zone. They had a third and one when Juszczyk broke free and got through safety Mike Mitchell inside the 10-yard line, evading additional defenders to dive over the goal line and into the end zone for what was the first rushing touchdown of his career—though his sixth in total.

As you might figure, Ravens Head Coach John Harbaugh was asked about that score after the game, and how it left 78 seconds on the clock with the Steelers possessing two timeouts, and whether or not he considered advising his team not to score on that play so that they could take more time off the clock.

“Yeah, it’s tough to balance that”, he said, adding, “we’re trying to score a touchdown. If you’re saying we should have sat on the ball and then kept our fingers crossed to score later, I would say that’s not a strategy I’ve seen attempted too often”.

It is a strategy that you see when a team is trailing by two or fewer points, not four points. When a touchdown is a necessity, then it is far more difficult to pass up the opportunity to take it. The Steelers were the victim of this in the game just before their six-game winning streak, when they left 42 seconds on the clock following a fake-spike touchdown to take the lead.

The Steelers have stopped an opposing offense on four of 13 occasions this season from scoring a touchdown when they have had a first and goal situation within the five-yard line. That may well have factored into the thinking as well, if there was any, as there was unlikely any expectation that the fullback carry would have been a scoring play. He simply made a quality play, even though it ended up costing them the season.