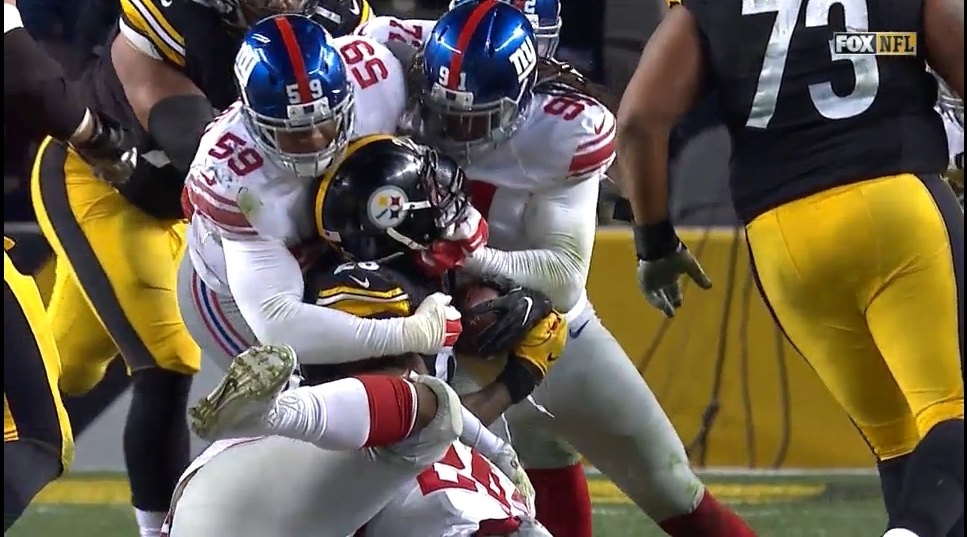 The offensive line are the bouncers of the offense. And they protect the VIPs – quarterback and running back. So when someone comes in and tries to rough them up, the bouncers step in.

Sunday, that was Ramon Foster’s job.

If you missed it, late in the fourth quarter Sunday against the New York Giants, Le’Veon Bell was twisted and grabbed under the facemask by a hose of Giants, including #91 Kelvin Sheppard.

Foster saw it and stepped in, throwing Sheppard off the pile.

Speaking to Jim Rome on The Jim Rome Show Monday afternoon, Foster explained what happened. In short, you gotta stand up for your guy.

“Like you said, he was already down on the ground. The refs were already blowing it dead. You had guys trying to do some extra stuff and playing offensive line, protecting your running back and your quarterback are your two most important things you have to do during the game. The stuff they were doing to him on that particular play and the stuff they said before the game on how they wanted to get him and how they wanted to stop him. To see the extra stuff, you have to step in.”

Foster did risk a penalty in a game that was not entirely over, pulling a player off a pile is illegal, but to him, the risk was well worth it.

“I would’ve felt a lot worse if I did not do anything. For one thing, it’s his player safety and livelihood…at a certain point [the defense] has to pull back. You can’t be trying to pull guys back underneath their chin.”

Foster was not flagged for his action. The chipiness continued after the player, with everyone getting involved, and carried over to the next play, when Foster and Nix nearly took on the entire Giants’ front seven. Here they are, their helmets barely visible around the school-yard fight circle New York had built. 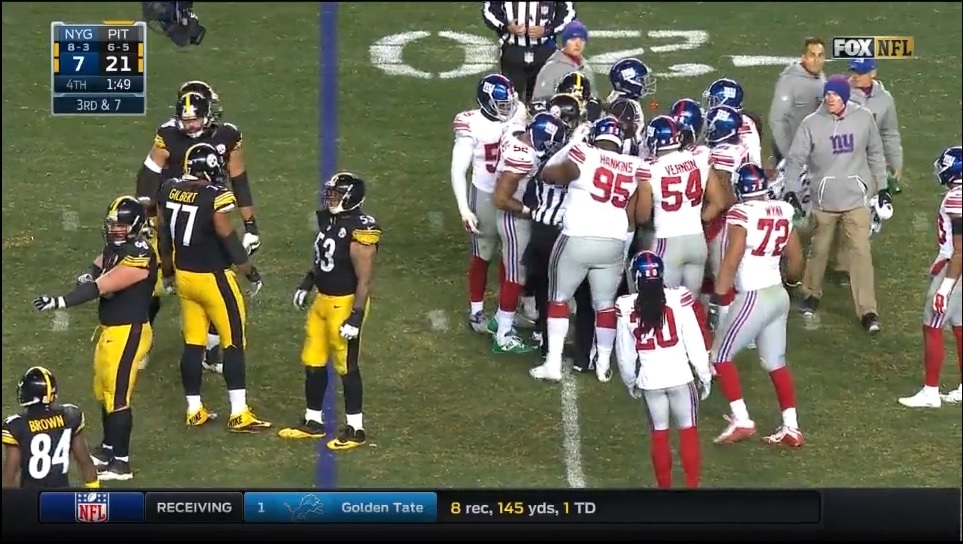 The Steelers’ drive would quickly end after that and capped by a Randy Bullock field goal to wrap up the win.

Foster said his decision wasn’t just to affect the present but the future and send a clear message to all future teams. Don’t mess with 26.

“Certain stuff just can’t be tolerated…it’s not for the guys we’re playing at the particular moment, it’s for weeks after. Teams will know that won’t be tolerated. That’s how you have to play this game. As much safety protocol and stuff like that we put into the game, football is still football. Taking the will away from the guy you’re playing against.”

Foster is the veteran of the offensive line and one of the longest tenured Steelers on the offense. Only Ben Roethlisberger has been around longer. He’s the Steelers’ NFLPA rep and an in-house leader. His actions, clearly the right decision to stick up for his guy, will speak volumes to the rest of the locker room and as Foster points out, let the rest of the league know the consequences.