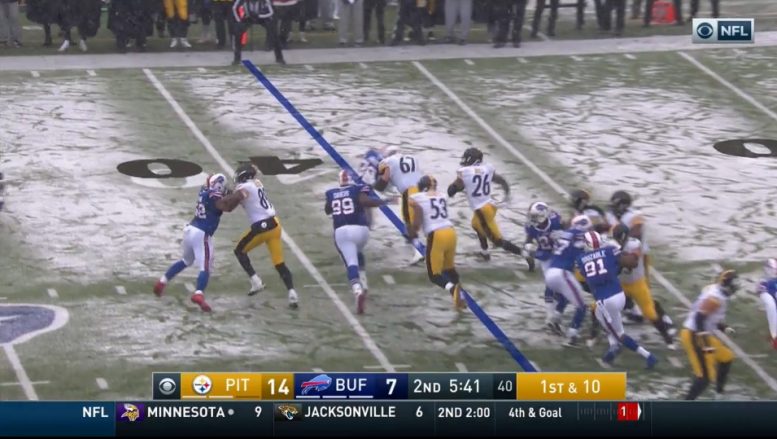 If you like watching guards pull, you had to enjoy watching the Pittsburgh Steelers win this past Sunday over the Buffalo Bills.

In total, the Steelers ran the counter a total of 14 times for 71 yards and all featured running back Le’Veon Bell carrying the football. It should be noted, however, that one of those plays that went for no gain was wiped out by a penalty on the Bills defense for offsides so in essence Bell averaged 5.46 yards on 13 counter runs. Let’s also not lose sight of the fact that Bell scored twice.

While we’ve seen the Steelers pull right guard David DeCastro to the left several times so far during his career, it isn’t often that we see left guard Ramon Foster pull to his right and that’s obviously because of his lack of mobility. However, with Foster sidelined Sunday with a chest injury, B.J. Finney started in his place and he showed a great deal of athletic ability the 6 times he was asked to pull to his right. Those runs netted 31 yards by the way.

Below is an example of Finney out in space and working to the second level to cut off Bills safety Corey Graham.

With it looking like Foster will return this week from his injury, he’ll more than likely be back as the starter for the remainder of the season even though Finney has played extremely well in his two starts at left guard. While it’s way too early to start worrying about what will happen in 2017, it will be interesting to see if Finney can push Foster for his starting job next year.