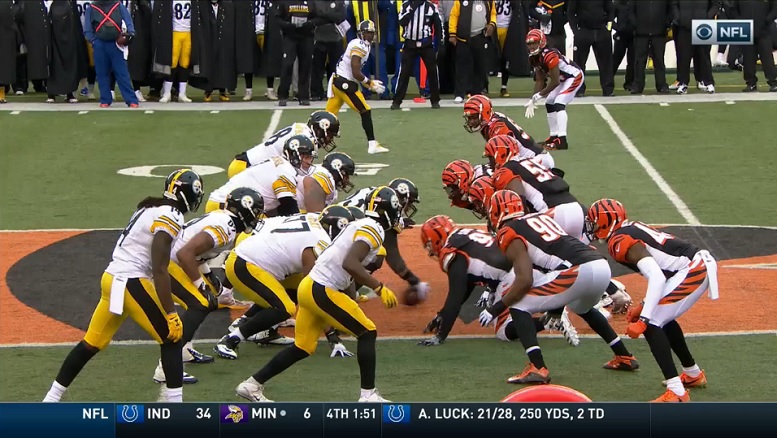 While it won’t show up in the gamebook, Pittsburgh Steelers center Maurkice Pouncey made a heckuva play in the fourth quarter of Sunday’s win over the Cincinnati Bengals. In fact, it not only kept a fourth quarter possession alive, that drive ultimately culminated in the go-ahead touchdown.

With 9:08 left in the fourth quarter, the Steelers faced a 3rd and 1 at the Bengals 48-yard-line. Prior to the snap, Bengals defense tackle Pat Sims jumped into the neutral zone and upon seeing that, Pouncey snapped the football to quarterback Ben Roethlisberger, who then proceeded to roll out to his right and throw deep down the right sideline to wide receiver Sammie Coates. The underthrown football not only fell incomplete, it was almost intercepted by Bengals cornerback Dre Kirkpatrick.

Thanks to Pouncey snapping the football when he did, Sims was flagged for being offsides and the Steelers offense received a new set of downs as a result. He did, however, give a head bob prior to the snap and that it is what probably led to Sims leaping forward. Roethlisberger was asked about that play after the game.

“Oh no, I’m not going to divulge any information on that play,” Roethlisberger said while smiling during his post-game press conference. “That was a well-designed play.”

You can tell by the play that Roethlisberger had every intention of throwing the football down the field on that 3rd and 1 play. Had Sims not been caught in the neutral zone by Pouncey, head coach Mike Tomlin would have had to decide whether or not to leave his offense on the field on 4th down. Remember, the Steelers were out of field goal range at the time and trailing the Bengals 20-18.

Later during his talk with the media, Roethlisberger was again asked about Pouncey’s snap and if that was a result of him seeing Sims jump into the neutral zone.

“I can’t tell you about that play, but it was executed the way it was supposed to be,” Roethlisberger said.

It sure was, I think.