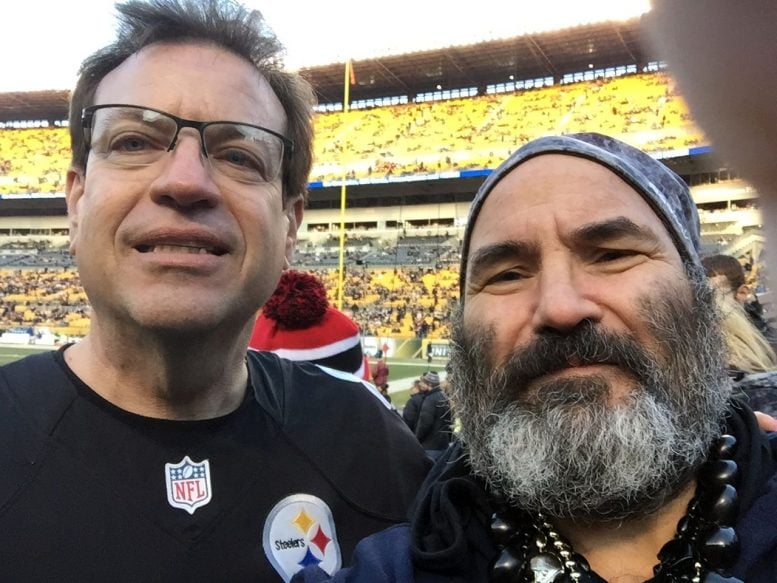 Well, Steelers fans; it’s Tuesday morning; I just pinched myself again, and I’m not living in a fictional world. It was a very merry Xmas and the Pittsburgh Steelers did it! This is neither a novel nor a report so placement of the conclusion is at liberty. The Steelers did it!

What exactly did they do of such importance? Well they finally broke the yoke Ravendom that has plagued Pittsburgh for six of the past seven games and in doing so reclaimed their throne as Kings of the North – almost an afterthought. The stadium erupted as Antonio Brown had what seemed like four dudes draped on his body; one yanking at his facemask but he still managed to stretch that ball over the goal line and the referee decisively reaching for the sky signaling touchdown and perhaps exasperation that there was no way this was going to be reviewed if he valued his skin on his body. Ecstatic fans letting their pent-up emotions come billowing out of their throats in appreciation of a brilliant come from behind winning drive to defeat a very tough Baltimore team filled the air.

Earlier in the day; I had hopped into my car with my number 2 son in the DC metro area to make the drive to Pittsburgh. Christmas had been celebrated on its eve by our immediate family; as two of us were being dispatched to witness the most important football game so far this season for the Steelers. As we drove up the interstate in Maryland, the first good omen was at least 10-20 vehicles we saw heading north were sporting Steelers regalia – none were spotted with crow sign. We crossed into Pennsylvania at Breezewood and just before the Turnpike is the big Black & Gold Store feature all things Steelers, Penguins & Pirates – we’re still 124 miles from Heinz Field but reassuring to see this Black & Gold bastion marking entry into geographical Steelers country.  Coffee break at the Midway rest stop and another very good sign: it is normal to see plenty of people wearing Black & Gold inside on gamedays. But it is also an early indicator of whether rival support would be heavy or light. No purple in sight.

We arrived in Pittsburgh quickly checking into our hotel at Station Square across the rivers from the stadium. Dumped our stuff in the room and walked over to board the Gateway Clipper en route to the stadium. A nice way to arrive, not sure if many other stadiums have a floating fleet that drops fans off just outside the stadium. Larry Brown, a Steeler legacy as at the game. Art Rooney II came down to greet some fans at the Champion’s Club. I got to shake his hand and thank him but missed the opportunity to tell him what I wanted to say, “Regardless of today’s outcome, I want to thank you and your family for doing what you do; and sincerely hope you keep doing what you do.” I also wanted to say that, “there are many Mike Tomlin doubters; but I’m not one of them and hope that you stay the course.” Missed opportunity but at least make my opinion a matter of record here.

Pregame nerves were everywhere; almost everyone anticipating a tight game; hopeful for a Steelers victory but fearful that some of the recent injuries may hurt their chances. One exception was “Diesel Sam”. Sam is a season ticket holder in our section who often shows up on the jumbotron with his bushy beard and Brett Keisel jersey – that was signed by the bearded-one himself at a game a few seasons back. For this game, Sam was saying he was not as nervous as he normally would be. He just had a feeling that the Steelers had this one. They were going to do it; no worries.

After the Steelers opening drive to go ahead 7-0; I thought Sam might be right. That offense was clicking on all cylinders now if they just keep that up …. What was I thinking? I’m not a spoiled Patriots fan whose team beats division rivals 41-3. This is the Steelers. We can’t do that. The Rooneys must have stock in some blood pressure medications.

Joe Flacco throws one pass to tiny Steve Smith that goes for 44 yards but the referees don’t think that’s enough so a flag on Artie Burns for unnecessary roughness gives Baltimore another 15 yards to the Pittsburgh 37. In comes automatic Jason Tucker and the lead cut to 4. The defense was playing all right; but Joe Flacco was playing just a bit better.  Flags going against Pittsburgh stifling drives like Antonio Brown’s shove in the back to negate a 68 yard gain. We escaped the first half clinging to a 7-6 lead. That’s okay; Steelers get the ball to start the second half. We have Ben Roethlisberger behind center.

Ben! What did you do? Interception to open the drive. Triple Yoi. And just like that Ravens are in for a touchdown. They go for two and its 7-14.  Still early in the game; but Baltimore was not here to lay down. Baltimore kicking short to Fitzgerald Toussaint. Steelers answer the Ravens touchdown with a field goal. Doesn’t take a mathematician to figure out that this is not a winning formula. A series of runs and short passes result in Baltimore taking a 7-point lead. Time running out of the 3rd quarter but if ole reliable Ben can just get us down for another score we’re in this!

Ben! NO! Ben throws another interception. From my end zone seat it looked like Ben telegraphed the throw and the two defenders just jumped on the gift. The 4th quarter begins with Baltimore on the 9-yard line looking to add some points but the defense holds and thankfully it’s just a 10-point lead. Le’Veon Bell running very well. Sharp cuts to make tacklers miss and a bit of power running when needed. In for the touchdown 17-20. Steelers can do this.

The jumbotron went dark for Renegade. Heinz Field was starting to rock. Then Chris Boswell caught whatever was plaguing Ben. He kicks off out of bounds. Down ten points and Ravens start on the 40-yard line. The renegade must have worked because Baltimore was limited to a 3 and out. The Steelers needed some mojo. The killer B’s earned some of their $$ on the next drive as Bell ran for 36 yards on two plays and Ben threw two passes to Antonio Brown for another 47 yards. The drive was capped by Ben throwing to Le’Veon Bell for a seven-yard Touchdown! 24-20! Defense just needs to hold. Double renegade time.

7:16 left in the game. Baltimore drives all the way to the 19-yard line for the two-minute warning. Definite doubt about the outcome even for the most stoic among us. No boo birds but the noise during Baltimore possessions was sounding more and more desperate.  Can’t our players tackle. Too many times it seemed like the Ravens runner was going to be stopped for little gain but the pile just kept moving forward like a rugby maul. Too many times it looked like Flacco was going to be sacked only to bounce out of it and complete a pass to receivers that seemed entirely too open. The question in my mind was would there be any time left if the Ravens score. Fullback Kyle Juszczyk answers that question by breaking through and just diving over the goal line. Defense couldn’t hold him – but what if he fell at the 1 foot line – more time could be milked. If the Ravens are going to score at least there was 1:18 left on the clock.

Ben completed passes to five different receivers on this drive, and they did their job and got out of bounds when necessary to conserve seconds.

3 yards to Jesse James. Then eight to Antonio Brown who scampered out of bounds. Back to Jesse James for 16 and our second timeout. Heinz Field is not known as the loudest stadium; but the excitement of the crowd was so great; Ben was forced to wave his hands for quiet several times in this last drive. Demarcus Ayers for 9 yards and out of bounds. A minute to go and we’re at midfield. 20 yards to Eli Rogers and Ben spike the ball at the 19-yard line. A 6-yard strike to Cobi Hamilton and the final timeout is taken (I briefly wonder if David Todd is critiquing Mike Tomlin for clock management since we could really have used the full complement of timeouts here).

Ben throws the ball to Jesse James for 9 yards and the referee mishandles Jesse’s toss to him and another referee must scramble for the ball to get it placed as precious seconds’ tick away. Ben finally spikes the ball again but not before 18 seconds are lost.

At this point; myself and others are screaming for the Steelers to finish it. No overtime. We want this game over with a touchdown. We know better but the intensity of the moment has taken over. Ben waves his hands down, quiet, quiet. Men at work. Ben hits Antonio who is running and … The Steelers did it! Heinz Field erupts; in my mind, I hear Pharrell Williams singing ‘Because I’m happy …’

I see Diesel Sam who has a front row seat leaving; he who earlier was having that feeling; I give him my usual; “We had ’em all the way.”; he smiles and says “Yeah, right!”

Epilogue: I drove up to Beaver PA to visit with my Brother and then see Faye, my mother-in-law who was celebrating her 90th birthday on the 26th. All she could talk about was the game. I asked if she watched the game on the new widescreen in the common room at her senior center. She said; “Oh no, not me. I watch the game alone in my room, I don’t want to be distracted.”