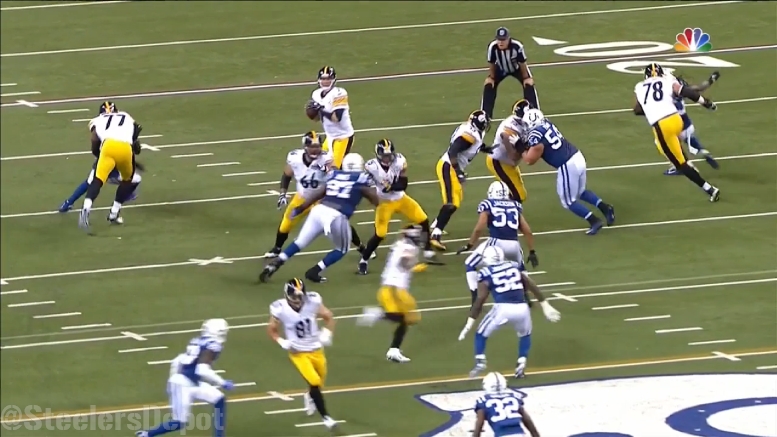 Although the Pittsburgh Steelers would gladly swap records, they do bear some key similarities to their upcoming opponents, the New York Giants, that bear noting. While the Steelers’ offensive line has the clear edge in the running game, neither line has relinquished many sacks. They are both top performers in that regard.

Likewise, both teams have spent most of the season dealing with a rather anemic effort with respect to rushing the passer—that is, until the last two games. And there is yet another pattern here that is going to play a key role, I think, in the game: they both have gotten crucial performances from some of their key players in that span. And they will be facing each other on Sunday.

Steelers right tackle Marcus Gilbert has played his best football of the season over the course of the past two weeks as he has worked his way back—or through—a number of injuries this year. While I have complimented his work in the running game, the fact is that Ben Roethlisberger hasn’t been sacked in two weeks, and has been pressured relatively little.

On the flip side, there is Giants defensive end Jason Pierre-Paul. He has seven sacks on the season, which is comfortably more than any player has on the Steelers. But five and a half of them have come in the past two games. He had three sacks against the Browns on Sunday, and added two and a half against Chicago the week before. He has also forced a fumble in each of his past two games.

While Pierre-Paul does move around some, as do the Steelers’ outside linebackers, he primarily plays as the Giants’ left defensive end, which means that he is going to see the bulk of his time working across from Gilbert, meaning that this is going to be a battle worth highlighting.

And that applies not just in terms of pass protection, but also in the run game. The Steelers have been finding success in the past two games running off right tackle or tight end behind Gilbert, including plays in which he worked to the second level. But Pierre-Paul is also a very good run defender.

It will be strength against strength in this matchup, and, really, I don’t expect there to be a clear winner. Gilbert and Pierre-Paul will likely both find some level of success against each other on the day—but the latter might find more success when he is working on the other side of the ball, if I’m being completely honest.

According to Pro Football Focus, Gilbert actually has the best pass-blocking efficiency rating among right tackles in the league, and they credit him with surrendering only nine pressures on the season, though he did miss three games.

They also note, however, that the Steelers’ right tackle has not had to deal with a player of Pierre-Paul’s caliber yet. But he did last season, and he handled those high-profile names quite well.