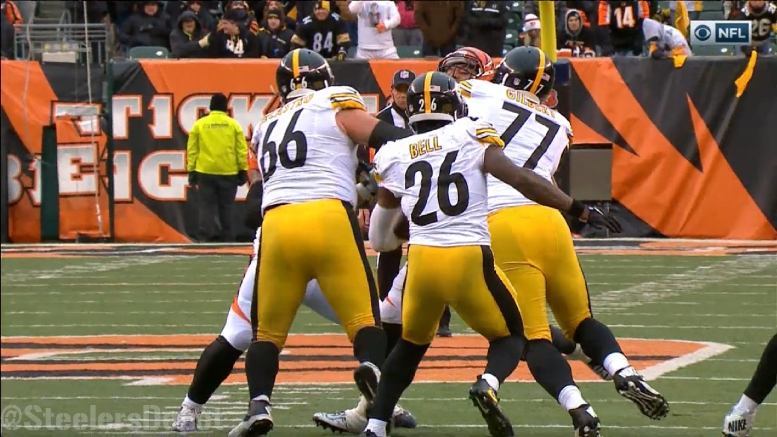 While teammate Antonio Brown may have spent yesterday making some NFL history, Pittsburgh Steelers running back Le’Veon Bell also managed to make some franchise history for himself during his performance against the Bengals, establishing a new record for the most yards from scrimmage in the first four seasons to start a tenure with the team. The previous record holder was Jerome Bettis, who was traded to Pittsburgh after three seasons with the Rams.

Le’Veon Bell is 23 scrimmage yards from surpassing Jerome Bettis (5,804) for the most by a player in their 1st 4 years with the #Steelers.

Over the course of his first four seasons with the Steelers, Bettis compiled some truly exceptional numbers, rushing for 5372 yards on 1310 carries, and adding another 432 yards through the air on 74 receptions, giving him a total of 5804 yards from scrimmage.

Bell just passed that mark yesterday against the Bengals, coming into the game with 5782 yards from scrimmage over the course of the first four seasons of his career himself. He picked up 93 yards on the ground and added another 38 yards through the air to give him 131 yards on the game, bringing his four-year total up to 5913 yards for the season.

Now, he only needs 87 yards over the course of the final two games of the regular season to become the first player in franchise history to record at least 6000 yards from scrimmage in the first four seasons of his career with the Steelers. Considering that he is averaging almost 130 yards per game for his entire career, and even more than that this season, it would probably be a safe bet to say that he reaches that mark.

Also something to consider is that Bell has missed a lot of time over the course of his first four seasons. He missed the first three games of his career with a foot injury, then half of last season with a knee injury, and he has served two separate suspensions for a total of five games. That adds up to a total of a full season that he has missed already in his career.

Yesterday’s game was the 11th on the season for Bell, who now has 1146 rushing yards on 241 rushing attempts and another 601 receiving yards on 72 receptions, giving him a total of 1747 yards on the season. If he manages to pick up 253 yards over the course of his final two games—which is, again, less than what he is averaging—then he will go over 2000 yards from scrimmage for the second time in his career.

The All-Pro runner also accomplished that feat in 2014 when he rushed for 1361 yards and added another 854 yards through the air in so far his only 16-game season. In six games last year, he totaled 699 yards in less than six full games. As a rookie, he totaled 1259 yards from scrimmage.

Bell entered this game trailing only David Johnson and Ezekiel Elliot in scrimmage yards on the season, both of whom have played every game so far. He was closing in on Elliot before last night’s big game, though Johnson is already nearing 2000 yards, and will be extremely difficult to catch with two games remaining.