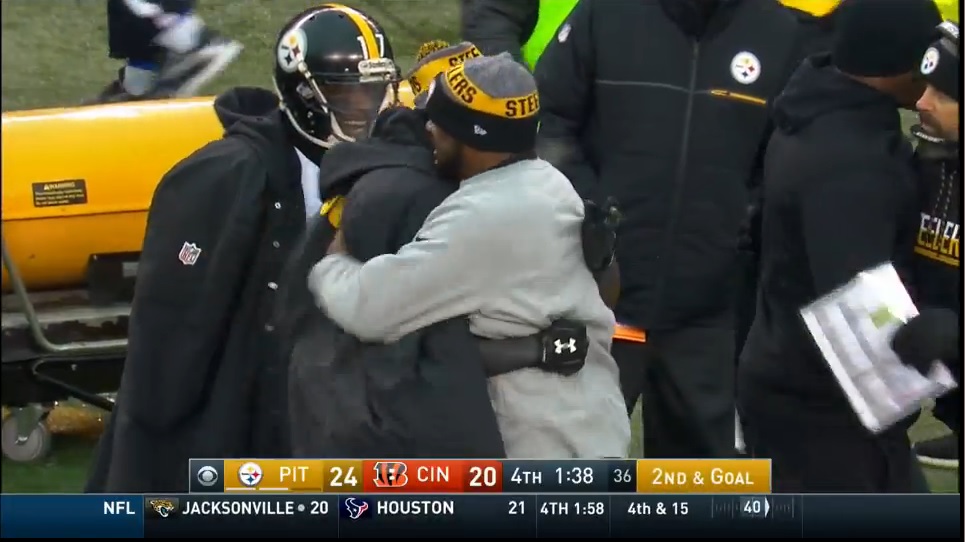 Jeremy Hill should’ve known. Don’t mess with The Terrible Towel. After his celebration, the Cincinnati Bengals barely scored again and the Pittsburgh Steelers would mount a comeback in a 24-20 win.

The Steelers march on, poised to win the AFC North while the Bengals were officially eliminated from playoff contention.

But it didn’t start that way. The Bengals dominated the first half with a strong run game and the Steelers hurting themselves in every way imaginable. Cincinnati began things with a field goal off a 14 play, 70 yard drive where the Steelers lost Stephon Tuitt to a right ankle injury. He would not return and for the rest of the half, the run defense would suffer.

Pittsburgh answered the call with three of their own, a 45 yarder by Chris Boswell. That would be the theme, his own Groundhog Day, kicking six of them by game’s end to tie a franchise record.

The Bengals broke past the goal line on their next possession. Aided by a 39 yard pass interference call by Artie Burns that put the ball on the one, Andy Dalton sneaked over right guard on 4th and goal to push the Bengals up 10-3. They’d have the same result on their next drive, Hill’s four yard touchdown where some “fan” tossed him a Terrible Towel. Hill attempted to rip it, failing, and then threw it to the ground as the Bengals led 17-6.

Pittsburgh would inch their way with another field goal, a 49 yarder by Boswell that barely went over the bar. Antonio Brown found the end zone on third down of the drive but a Le’Veon Bell chop block negated the play.

Cincinnati would add another three shortly before the two minute warning while Pittsburgh would get three on another, absurdly enough, 49 yard field goal by Boswell as the half ended. But by that point, the Bengals led in score and practically every other category, a 20-9 advantage.

It was death by 1000 paper cuts in the third quarter. Pittsburgh would run drives that resulted in three field goals, slicing the Bengals lead to just 20-18. Boswell bingo’d his way from 40, 49, and 30 yards out.

Lawrence Timmons had one of the biggest plays of the quarter, intercepting a Dalton pass thrown right to him that gave Pittsburgh the ball at the Bengals’ 34 in a 20-15 game. Again, no touchdown, another Boswell field goal, but it put the Steelers that much closer and for the first time all game, the feeling the tide had turned for good.

Dalton ended the day just 16/27 for 157 yards, no touchdowns and a pick. Only Brandon LaFell, had more than 20 yards receiving.

After Boswell’s third field goal, the Bengals got the ball back but promptly went three and out. Ross Cockrell closed well on the sideline on a critical third and 11 play to force the Bengals punt.

Starting at their 31, the Steelers didn’t waste any time. They moved the ball 69 yards in five plays. A 12 yard run by Bell. A ten yard completion to Ladarius Green. And then the Bengals bungled, committing four consecutive penalties that took the ball from the Bengals 48 to their 18.

On a 2nd and 16 from Cincinnati’s 24, Ben Roethlisberger found Eli Rogers streaking open over the middle for six. A questionable two-point conversion failed but the Steelers were finally ahead 24-20 with barely more than seven minutes remaining.

On the afternoon, Roethlisberger went 21/36 for 289 yards and that touchdown. He wasn’t picked and sacked only once, coming on a busted play where he simply dove forward.

The Bengals got the ball back just once more, flaming out in four plays. The Steelers chewed away the game’s final 5:53, highlighted by a courageous 28 yard grab byGreen on 3rd and 8. Green would leave the game with a probably concussion. But he also left with a win as the Steelers move to 9-5 on the season and a big matchup against the Baltimore Ravens on Christmas Day.

NOTES: Bell had 93 yards on the ground and another 38 in the air, giving him yet another 100 yards from scrimmage performance. Antonio Brown hauled in three grabs for 58 yards. LaFell led the Bengals with 91 yards on seven grabs. James Harrison had a Steelers-high nine tackles.