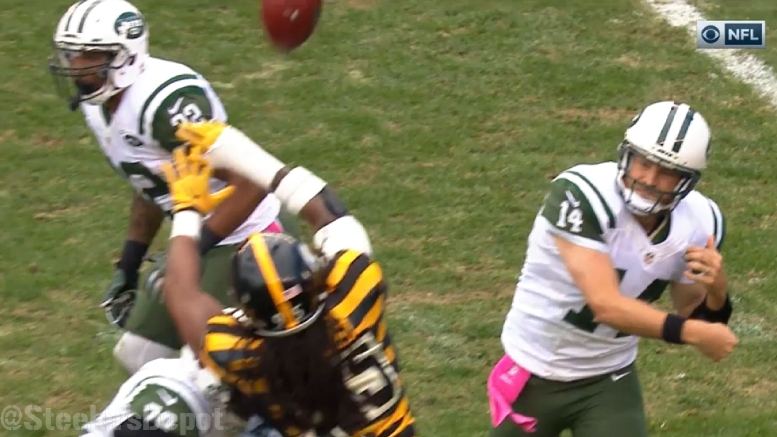 Over the course of the past several weeks, Pittsburgh Steelers outside linebacker James Harrison has been on the field for all but one snap. For some reason, following an interception on the offense’s first play of the second half, Arthur Moats played in his place for one snap before Harrison joined the rest of the defense.

Likewise, Bud Dupree on the opposite side has played all but one snap, with that one snap proving to be a touchdown pass. That was not the fault of his replacement, Anthony Chickillo, who recorded a quarterback hit on that play.

All told, the snap counts from the past few games read as follows: Harrison, Dupree: a bunch (also known as all but one); Moats, Chickillo: one apiece; Jarvis Jones: bench warmer. To be more accurate, Jones spent the first game of his career as a healthy player on the game-day inactive list on Sunday. He has been benched.

That is not ideal considering the fact that he is heading into unrestricted free agency after this season and is not having the opportunity to put any more snaps on tape. Although that may be for the best, as, according to Pro Football Focus, Jones has had more snaps rushing the passer than anybody in the league who has not recorded a sack. Not exactly the company you want to keep.

About his current predicament, Jones told Chris Adamski for the Pittsburgh Tribune-Review that “it is what it is”, and that his focus is more on the team than himself. “Playoff time, man, that’s what I’m focused on”, he said. “Whatever happened over the course of the season, it happened. I’m focused on the plans in front of us, and that’s Cleveland this week. And beyond”.

After it being pointed out that Harrison’s ascension into the starting lineup, and his eventually establishing himself as the every-snap starter, has coincided with the Steelers’ six-game winning streak, Jones acknowledged that the defense “has been ballin’”, and that “they’ve got a tempo” with Harrison and Dupree running the show.

“They’re meshing at the right time, and you can’t take that away from what those guys are doing”, he concluded. It was the voice of somebody who certainly seems to be well aware of the situation that he is in, and the fact that he may have an uncertain future. While he is certainly employable, he may have a hard time landing an opportunity to start in free agency in 2017.

It might be fair to say that Jones has been the worst draft pick that Kevin Colbert has made since coming to Pittsburgh, taking into consideration his contributions to the team relative to where he was selected, with the 17th-overall pick in the 2013 NFL Draft—especially when they selected an All-Pro in the second round.