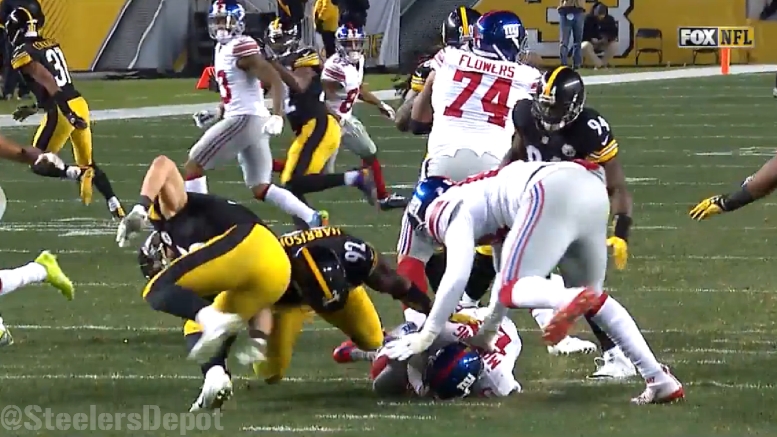 It would appear that the old man, 38-year-old outside linebacker James Harrison, still has it in him to be an impactful player. That is, after all, why the Pittsburgh Steelers are now relying upon him to be their primary weapon at the position in a four- or five-man rotation in which he is now working as the player likely to be receiving the largest share of snaps.

Harrison was arguably the most important defensive player for the Steelers last year, as he was able to fairly consistently get the better of Giants second-year former first-round left tackle Ereck Flowers. In fact, he even got the ball rolling when it came to putting points on the board.

With about three minutes to play in the first quarter, the Giants found themselves facing a third and 14 from their own five-yard line when Harrison bull rushed against Flowers into the end zone. The 22-year-old left tackle had no alternative but to grab the 38-year-old pass rusher by the helmet to try to slow him down.

The result of that action was a holding penalty—one of many, frankly, that could have been called against Flowers during his frequent snaps against Harrison—and since it occurred in the end zone, the play resulted in a safety, and two points for the Steelers. It was their first safety they had recorded since 2014.

It was fortunate, as well, that the officials had appropriately flagged the play, because the Giants would otherwise have successfully converted the third and 14 with a 15-yard passing play. It is worth noting in the battle between Harrison and Flowers that the former was actually close to registering the safety the old-fashioned way earlier on that possession, with a sack.

But Harrison did manage to get his sack on the board as well, later in the game, at the start of the third quarter. With New York facing a third down with six yards needed on the third play of their opening drive, the former Defensive Player of the Year got around the edge to get to Eli Manning, who turtled to take the sack for a loss of nine yards.

We know that Harrison had gotten to Flowers throughout the game, but no moment better illustrated that when he was able to induce his young adversary into a false start in a critical situation late in the game.

With the Giants trailing 21-7 early in the fourth quarter and having just gotten an interception, the offense managed to reach the Steelers’ 30-yard line, but were facing a third and eight, when Flowers moved early. The false start set up a third and 13 that was incomplete. They went for it on fourth and 13, and the pass was intercepted.

It was a fine day at the office for the 14th-year veteran, who now leads the Steelers with five sacks on the year, including one in each of his last three games, and all five in his last five games. With an interception and two forced fumbled to go along with it, he hasn’t quite aged like fine wine, per se, but it still tastes pretty damn good.