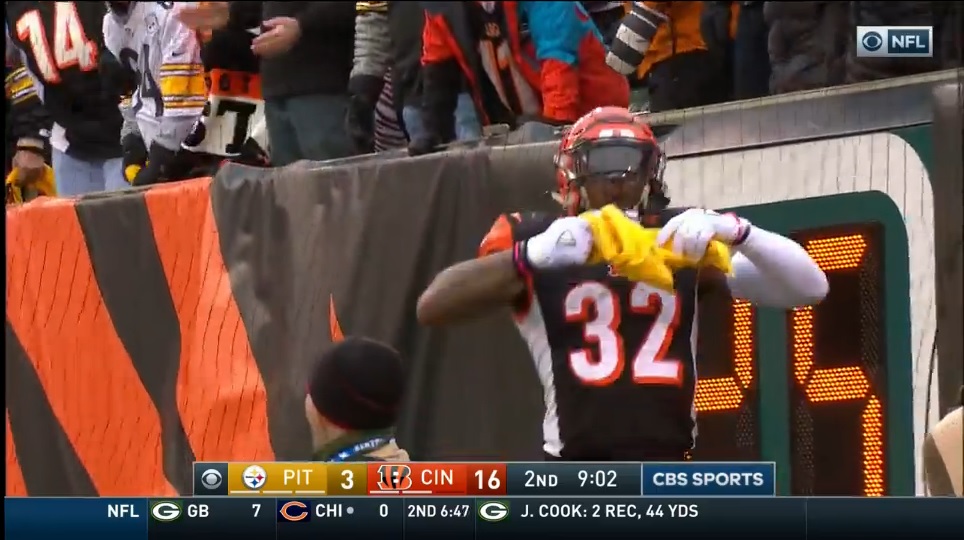 If you’re a Cincinnati Bengals fan, blame Jeremy Hill for this loss. Because desecrating a Terrible Towel is like the monkey’s paw. It might sound good in the moment but always ends in disaster.

After Hill’s antics, the Bengals would only score one more field goal the rest of the game and blow a 20-6 lead, falling to the Pittsburgh Steelers 24-20. In the loss, they were eliminated from the playoffs, not that they had much hope to begin with, while the Steelers are in control of the AFC North.

Ike Taylor, a longtime member of the Steelers-Bengals rivalry, took to Twitter to speak the truth.

Because Hill isn’t the first Bengal to do it. T.J. Houshmandzadeh wiped his feet on the Steelers’ staple in 2005, the last time the Bengals scored 20 first half points against the Steelers until today. They would hold on to win that game, 38-31 but falter the rest of the way and lose the Wild Card game to Pittsburgh. The Steelers would go on to win their 5th Super Bowl.

Hill also was injured in this game, briefly leaving before returning, but he – and his offense – wasn’t the same after his end zone “celebration.”

Many have replicated the Terrible Towel but none have come close to having its impact. It’s an icon, a downright celebrity in Pittsburgh, and an easy way to see how many Steelers’ fans are in an opposing Steelers (hint: normally a lot). It’s unifying for fans and the team.

When you mess with that symbol, you bring everything on yourself. Maybe Hill will learn to quietly hand the football to his QB next time.