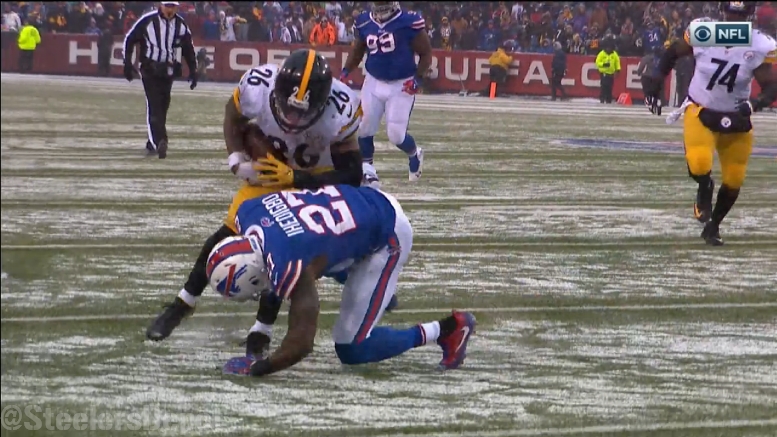 I think you would be hard-pressed to find anybody who understands and appreciates football who could come away from the Pittsburgh Steelers’ game on Sunday and not be impressed with what running back Le’Veon Bell was able to do on the field, putting together one of the best offensive outputs in Steelers history, if not the best.

The fourth-year running back recorded 236 yards on the ground on a career-high 38 carries, setting a new Steelers record for rushing yards per game, and also tying Willie Parker for the most 200-yard rushing games in team history. He also authored the 12th game in team history in which a player has scored three rushing touchdowns, which was most recently done by DeAngelo Williams.

On top of that, he added four receptions, including one that went for 33 yards, for a total of 62 yards. All told, his 42 touches produced for the Steelers an output of 298 yards and 18 points, virtually singlehandedly upending the Bills by himself.

And just in case you needed to be even more impressed by his performance, according to Elias Sports, Bell became the first player during the 2016 season to have singlehandedly outgained his opponent, as his 298 all-purpose yards were 23 yards more than the Bills offense gained in total, finishing the game with 275 yards.

Bell does not actually have the most yards by a single player this season—Falcons wide receiver Julio Jones owns that distinction when he gained a bit over 300 yards through the air on a game—but it is still one of the highest totals in the history of the game, and I would not imagine that it happens very often for a player to outgain an entire team, so don’t let that diminish your appreciation of this accomplishment.

As if that were not enough, Bell’s huge game is putting his name in line with some extremely exclusive company both in terms up output for an individual season, as well as with respect the total body of work for his career—early as it may be into his career, one can hope.

On the season, Bell is averaging a superb 161.6 yards from scrimmage. Does that sound amazing to you? It probably should, because it’s the second-highest per-game average in NFL history, behind only Priest Holmes’ 163.4 yards in 2002. Only nine seasons have been completed with a player averaging more than 150 yards per game—and three of them came from Marshall Faulk.