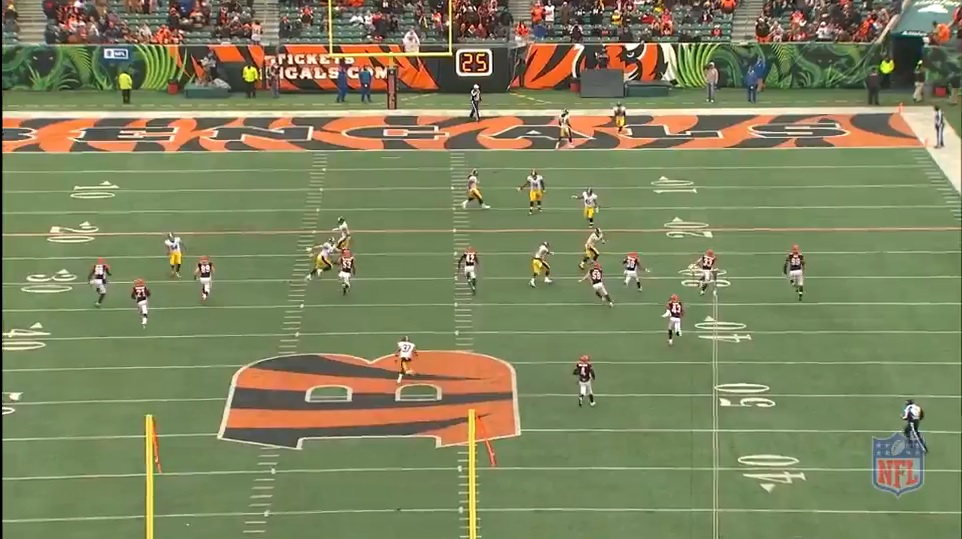 I ask that semi-rhetorically because I think we all have a sense for what the goal is here. But, c’mon man! This has to be one of the least practical return ideas you’ll see this season.

Twice on Sunday against the Cincinnati Bengals, Danny Smith had Jordan Dangerfield do this. Loop around the whole field, running behind the Bengals’ coverage unit, to try and – I guess – set up a wall along the right side of the return. Here’s the two examples. Judge for yourself.

Again, you can kinda sorta tell what the aim is here. A return to the right with Dangerfield trying to be that extra guy to pave a lane. But this is so long-developing that he winds up watching the return, standing and waiting, for basically the entire time of the one return that happens in those two GIFs.

It frees up the away side of the coverage team to come down free and squeeze things back the backside, tracking down Fitzgerald Toussaint from behind after a short return.

The added issue is how obvious it is to any special team’s coach of how the Steelers will operate. They only ran this with Dangerfield, subbing him into this unit twice. It was Arthur Moats who started at this left tackle spot and when he was on the field, the Steelers would use their normal return.

They’re using Dangerfield because he’s obviously a better athlete who can motor across the field better than a linebacker but it makes it easy to recognize when there’s a new personnel member out there. You know exactly where the return is intending to go to before you even kick and can adjust accordingly (pin to the right, have the backside coverage team squeeze sooner).

Not to mention the risk you take of a block in the back because Dangerfield is forced to trail everybody. It makes him be super cautious, reducing his effectiveness.

I’m all for innovation on special teams and giving some different looks, but this one just seems inefficient, ineffective, and downright obvious.