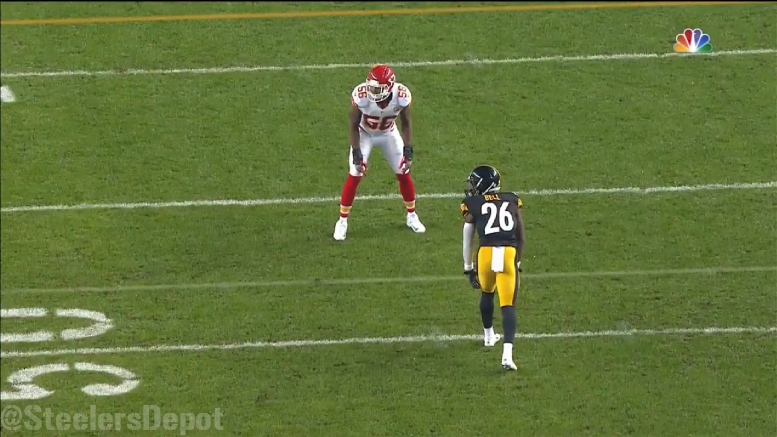 We all know by now the type of player that Pittsburgh Steelers running back Le’Veon Bell is, and has become, over the course, and maturation, of his professional career. He is a player that is capable of doing virtually everything on the offensive side of the ball, and we see that in the distribution of his touches, as more than a quarter of his touches this year have come through the air.

With 151 rushes to 57 carries, Bell’s workload as a pass-catcher is well above and beyond the average running back. That much should go without saying, and, if not, pointing out that his 57 receptions ranks 21st in the league despite missing three games and, you know, being a running back, should be able to accomplish that.

But according to Jeremy Fowler writing for ESPN, you can’t truly appreciate the sort of pass catcher that Bell actually is unless you get to see what he does in practice. Fowler writes that his practice highlight reel of catches rivals that of Antonio Brown’s, with Bell confirming to the reporter that “he snagged two off-balance touchdown catches” during a recent installment of Seven Shots.

“In practice, I really get an opportunity”, Bell said about the differences between how he works out at wide receiver in practice versus how it ends up playing out during games. “In the games, we don’t necessarily get in the situation to be able to run certain plays in the red zone or things like that. In practice, I get to show a lot of things I can do”.

96 of Bell’s 521 snaps this season in our charting have come with the running back lined up explicitly as a wide receiver this year. That is roughly 17.5 percent of his snaps for the season, or very roughly about two in every 10 plays. Considering the position that he plays, and the fact that that also includes running plays, that is a fairly heavy workload on the line of scrimmage.

Perhaps nobody sees what he is able to do as a receiver more hands-on than the Steelers’ primary coverage linebacker on tight ends and running backs, Ryan Shazier—a role that he has been growing into over the course of the past season and a half or so.

According to Fowler, Shazier told him that “Bell’s spectacular pass-catching”, in the reporter’s words, “is so routine that defensive players don’t react loudly in practice because ‘it’s almost natural now’”. Line linebacker recalled one particular moment during practice when the running back made a one-handed catch on a go route.

I have already said it before this week, but I think that Bell’s receiving ability is going to be a crucial part of the Steelers’ game plan tomorrow in a victory over the Giants. New York has a very stout run defense, but their linebackers are nothing special, particularly when it comes to the passing game. And they frankly haven’t seen a pass-catching back like Bell.